PORTLAND, Ore. – Is Starbucks a tech company or a retailer?

That was the question I posed to Starbucks Chief Digital Officer Adam Brotman yesterday in Portland, where the company rolled out its new mobile ordering service – the biggest technology initiative the Seattle company has attempted since launching payments on the phone. 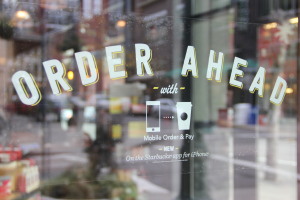 “When you talk to my team, or this group working this project, I don’t think there’s a difference between talking to us or a technology company,” he said. “We view our group as no different than if we were in Silicon Valley or in any other technology company.”

Yesterday, Starbucks kicked off mobile ordering in 152 stores in Portland, and next year, it has plans to roll it city-by-city with the goal of it being nationwide by year-end. Along with its aggressive geographic plans, he said it will also be adding an extensive list of new features to the service.

Next up is an mobile ordering-capable Android app early next year, followed by more features by year-end, including the ability to schedule an order; the ability to have coffee delivered to you; and international plans with an eye on the United Kingdom.

Here’s a transcript of our conversation, which has been edited for clarity and brevity:

We’ve been hearing about the potential for mobile ordering for awhile. How long has Starbucks been working on it?

Brotman: ”We’ve been thinking about it for years and working on it for a year in earnest. This is the equivalent of punching a virtual channel into the stores. It’s the most cross-functional thing we’ve ever done. First, we had mobile loyalty and then we had mobile payment, and now we have mobile ordering. The next city will be in the first calendar quarter of 2015. There’s a good chance there will be more than one city. We’ll try to match the Android launch up with it.” 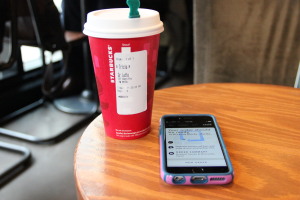 Will it be in Seattle?

Brotman: “It could be, but we aren’t revealing which city it will be. It will be a city with early adopters of tech, the right customer type and the right mix of stores. But it will be in every city by the end of 2015, and it will be a rapid roll out once we get into the second half of 2015.”

So, there’s no way you’d put the brakes on this?

Brotman: “No, this is happening, and I’ll explain why I say that so confidently. We believe it will be a huge driver to our customer experience and our business. The fact that we fully integrated this into our mobile app, but also our loyalty program and the card program, and the POS and operational flow. This is a fully integrated solution. That allows us to drive incremental transactions to our stores because now we are going to give customers back a little time and give them the confidence that they can make that extra visit. We’ll also increase the number of customers into our loyalty program.

Most importantly, we are going to improve the capacity and throughput of our stores, we are taking the pinch point of ordering and paying out of the line and into the palm of our customers, giving our baristas more time to make drinks and engage with customers. You are going to get more capacity out of the stores, and you will shorten the lines, and improve the customer experience. That’s going to be good for everyone, even those who aren’t using Order and Pay.”

I was going to ask you if you thought people in line would show animosity for those skipping the line?

Brotman: “No, curiosity, but not animosity. If we do this right, we are making the experience better for all customers because we are improving capacity and shortening the line.”

It must be a challenge to ensure that beverages are still hot by the time people arrive? 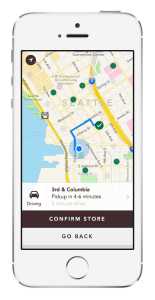 Brotman: “Yes, we have to get the operational flow down right and get the pick-up time accurate, but remember, we have a barista promise: If you get there late, or we get it wrong for whatever reason, we will re-make your drink. You are guaranteed to have a good experience, whether you are a mobile order customer or not. Our goal is to get the product nailed down, so that’s not necessary. We want to add features like scheduling ahead and pausing orders, these are all features we want to add in the future. We didn’t want to wait to launch the program when we have every feature, we wanted to be nimble and agile and have a true beta.”

What about enabling orders to be made based on a person’s location?

Brotman: “Yes, that’s on our road map. That’s really important for us to watch and learn, and find out what the top requested features are from our customers.”

How much of Starbucks is tech?

Brotman: “In terms of resources? Never enough. We have so many things we want to get done. But every group was involved in this, from the digital team to the tech team to operations. We don’t break out the exact numbers publicly. We all met once a week in one room and white-boarded the whole thing out. For this project, we built a full-blown store inside of our headquarters with food, drinks and a real POS. We had real teams beta testing it in the building. That’s the kind of R&D things we do internally.”

Earlier this year, Howard Schultz handed over day-to-day operations so he could focus on digital, loyalty and mobile programs, so you must have his attention on these issues?

Brotman: “He’s highly involved in all of our projects, but certainly he’s interested in the digital projects to make sure we get the experience right. He comes to the weekly meetings, but not every week — he gets updated on this much more often than once a week. His advice is invaluable. This is about an experience, and there’s no better person to give his opinion on how to craft an experience.”

Is this Starbucks’ major initiative of 2015?

Brotman: “We believe this is going to be game changing, in terms of both the customer experience as well as driving incremental transactions and improving throughput and capacity in our stores. To be able to do those things at the same time on a base of 12 million active users, which is our starting point, gets us really excited. We hope this will give us a throughput increase as much or more as anything we’ve done in the past.”

Do you have a wild guess for how many orders will soon be coming from mobile vs. the line?

Brotman: “We are at 16 percent mobile payment today and that number is rapidly increasing. We think this is as exciting or more exciting than anything we’ve done in mobile before. We’ll learn and we’ll see, but we are hoping it will be a game changer. While it’s not for everyone or every occasion, I can’t think of any members of our loyalty program who won’t have a need to order ahead to one of our stores. Combined with the ability for us to suggest food items or pairings, it will improve transactions but ticket and food attach.”

There’s always the Starbucks with the horrendous line, like at CES, across the street from your hotel.

Brotman: “Check this out, right now, if I’m building an order, the app is guessing what store I want to go to, but I can zoom in and see a different store. Maybe the one across the street of the hotel has a pick-up time of 20 minutes, but the one down the street is two to five minutes. it will tell you see the drive time or switch over to walking directions. You can check out how busy the stores are from order ahead, so that’s a great feature.”

So, the app intelligently knows how many people are in every store?

Brotman: “It’s doing an intelligent guess by using an algorithm of sorts that’s estimating how busy it is. It knows how many mobile orders have been placed, and it’s tied into the POS, so it knows how busy the store is, and it knows the history of that store at that time of day and year. Those are some of the things that we want to improve to get that wait time dialed in.”

What about the airport?

Brotman: “It’s in company owned stores in Portland today, and we are working on solutions for our licensed stores, so airports, Safeways and Targets. They are on our list to add to our road map. You can imagine how great it would be to have in airport store — placing an order from the security line and be able to pick it up on the other side. Coming soon! But honestly that’s an example of one of things on the long list of things that we want to do to improve it. We are going to add countries, we want to pilot this in the UK next year, we have big plans for this program for mobile ordering in general.”

Tell me more about delivery.

Brotman: “Mobile order and pay will lay the foundation for that. A natural extension would be delivery. You can imagine the same flow and instead of pick-up you can say delivery. We are talking to a number of third parties right now, and will launch before the end of the next year in select cities. We are working with a third-party logistics partner tied into our experience.”

Brotman: “It’s an opportunity to be creative. Mobile unlocks things that were not available six months ago, let alone six years ago. Think of all the potential partners out there that are doing mobile delivery or mobile logistics of some sort, like same-day delivery. Those trends that are being unlocked through mobile technology, and they are giving us the opportunity to marry what we are doing with mobile ordering. We believe the time is now for that — it’s an exciting thing that can be done and be done well.”

What about Uber as a partner?

Brotman: “We are talking to all sorts of partners for delivery.”

Mobile unlocks things that were not available six months ago, let alone six years ago. Think of all the potential partners out there that are doing mobile delivery or mobile logistics of some sort, like same-day delivery. Those trends that are being unlocked through mobile technology, and they are giving us the opportunity to marry what we are doing with mobile ordering.”

Would Starbucks consider licensing out its technology platform to other retailers?

Brotman: “I would never say never, but to be honest, that’s not our focus. Our focus is on adding more features to mobile ordering and bringing it to more countries, and adding things like delivery and scheduling. But we do think about our loyalty stars as currency, and see how it could play well not just at Starbucks. We have all the ingredients to take our loyalty program and thread it into other technologies and platforms. You can imagine someone earning those stars on another platform, like the airlines. It’s something we have been actively considering for awhile now.”

Would payments be involved?

Brotman: “Yes, you could see our stars being used to make payments on other platforms.”

What about using the Starbucks app to pay for something elsewhere?

Brotman: “It could, but our focus is on expanding the loyalty program, and taking mobile capacity and blowing it out. We are in discussions on everything you’ve mentioned above.”

How do you feel about Apple Pay? Today, iOS users can use it to reload their loyalty cards, but what about using it to pay in the store?