Moz already let people know that 2013 wasn’t its most successful year, and now there are numbers to prove it.

The Seattle-based provider of search-engine and social-media optimization software just publicly posted a detailed recap of its internal business numbers from last year.

Moz, which prides itself on corporate transparency, brought in a record $29.3 million in gross revenue, up 33 percent from 2012. But the startup also posted a $5.7 million loss in 2013 mainly due to a bevy of hiccups endured while launching Moz Analytics.

“We knew we were going to burn in 2013,” CEO Sarah Bird wrote today. “That’s why we took the $18m Series B. This is a bigger loss than we planned on, though, and we’re disappointed we missed our goals.”

Bird, who replaced Rand Fishkin as CEO in December, added that the company still has enough capital to continue growing and expects to be profitable by Q3 of this year. 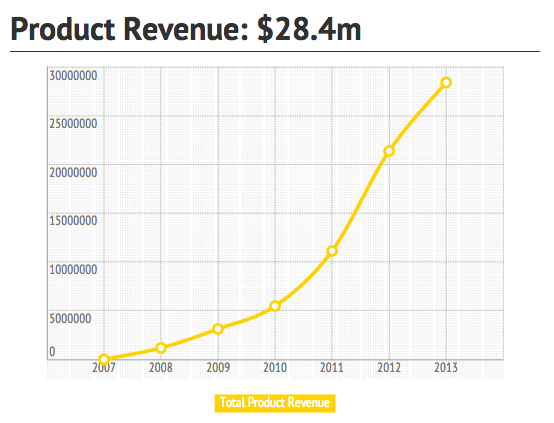 Fishkin, who co-founded the company back in 2004, noted in the comments section of Bird’s blog post that Moz approximately doubled revenue of its software business every year since 2007. However, 2013 was different.

“We had a relatively good January-June in 2013, but then made a series of poor decisions and poor execution that led us to where we are now,” he wrote.

Fishkin added that “my personal happiness and ability to contribute positively to morale fell massively.” Like he detailed in last month’s blog post, today he again explained that the struggles in the second half of 2013 made him realize it was time to pass the CEO torch off to someone else.

“For years, I had dreamed of what Moz Analytics could be, and how it would help marketers, and the delays coupled with the launch issues, the performance of the invite list, and the bugs/issues/quality around launch were incredibly disappointing,” Fishkin wrote. “As Sarah said, things have gotten better, but my expectations for this team are high. I hope we are able to do remarkable things in 2014.”

The 2013 year-in-review post reveals several other details about Moz’s performance last year, from web traffic (up 45%) to paying subscriber statistics (25,034 customers) to charitable donations ($105,090). The company also shared where it spends its money: 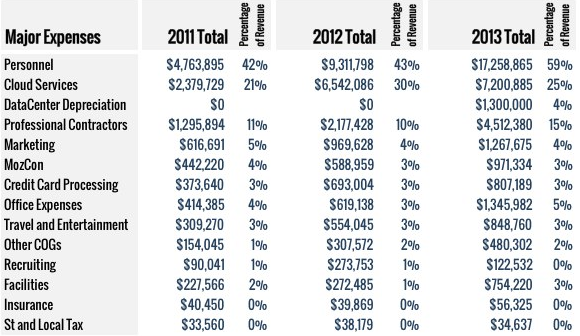 Moz, which changed its name from SEOmoz in late May and moved into a new office space in July, now employs 134 employees after adding 47 people last year.

Update, 11:10 a.m., Jan. 31 — Foundry Group’s Brad Feld, who sits on Moz’s board, wrote up a short blog post Friday in support of the company’s transparency.

Feld wrote that when most companies talk about transparency, “it’s bullshit.” He thinks Moz, however, is different.

“I know transparency is hard,” Feld wrote. ” … but when you talk about being transparent, it’s often useful to have a standard of ‘real transparency’ to compare yourself too. I’d put Moz at the top of that list in my book.”

Despite Moz’s $5.7 million loss in 2013, which the Seattle startup called “disappointing,” Feld sounded confident in the company’s future.

“Given all the things in motion, they and their team have done an amazing job of navigating another step function in the growth and development of the company,” he wrote. “They are extremely well positioned on all levels for 2014 — product, strategy, infrastructure, financials, cost structure, and team. And they have huge hearts.”