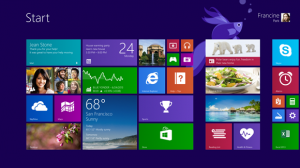 Microsoft announced today that it’s launching Windows 8.1 with Bing, a new variation on its current operating system. The new OS has one major difference from a standard installation of Windows 8: manufacturers can’t change the default search engine in Internet Explorer. That drawback comes with an advantage to hardware makers, though: it’s free for small tablets.

When a user powers on their device for the first time, they’re free to switch to Google, Yahoo, or any other search provider, but manufacturers can’t switch their device to a competing search engine at the factory. In exchange, OEMs get a cheaper version of Windows 8 to install on their devices.

Manufacturers who are building tablets under 9 inches will be able to license the new OS version for free, while creators of larger devices will get a discount on Windows 8.1 with Bing over a traditional license. The news comes a month after Microsoft first announced its plans to make Windows free for manufacturers of small devices at its Build conference in San Francisco.

It’s a part of Microsoft’s continuing push to make Windows an affordable choice for manufacturers creating low-cost hardware. Because the margins on cheap equipment are so low, OEMs are trying to find every fiscal advantage they can, which means cutting costs as much as possible. Windows 8.1 with Bing could make Microsoft’s OS a more affordable and interesting alternative for manufacturers who would otherwise choose Google’s Chrome OS for their ultra-low-cost device.

The move to offer cheaper software is key when Microsoft is competing against Android. The company, which was built on selling versions of Windows and other software at high profit margins, is facing increasing competition from other companies that offer their operating systems for free or low cost. Apple will be offering all of its future OS updates for free, while manufacturers can roll their own version of Android for free as well.

[This story has been updated to clarify the pricing structure for Windows 8.1 with Bing.]