Microsoft is grappling internally with the question of whether to expand its Cortana virtual assistant to Android and iPhone — weighing the needs of multi-platform users against the competitive differentiation that the technology could give to Windows devices. 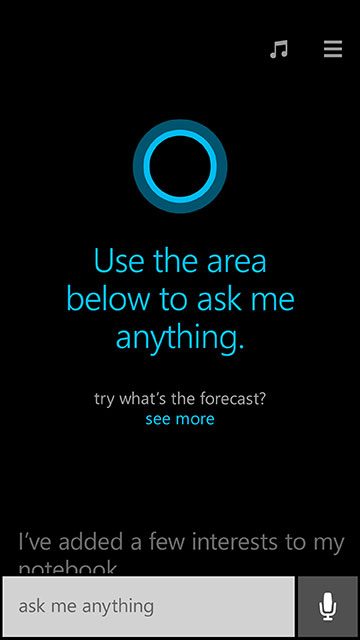 “It’s a bit of a head-scratcher for us right now,” acknowledged Marcus Ash, a group program manager for Windows Phone, when he was asked about Cortana’s possible future on Android and iOS at the SMX Advanced search marketing conference in Seattle today.

For example, a Windows PC user who uses an Android phone could find Cortana on the desktop or tablet to be an incomplete experience if the virtual assistant wasn’t able to take into account activity on the phone, and interact with the user via that device.

However, Ash added, “It’s interesting to think about the future of these assistants and whether they become a reason to buy into the ecosystem. That is the other tension we have. If you play this out five to ten years, and these assistants become the reason you choose Android or iOS or Windows, then what’s our position? Could Cortana be the thing that, as a Windows user, (makes me feel like) I’ve got to get a Windows phone?”

SMX Advanced conference organizer Danny Sullivan pointed out that the Microsoft Bing search app is available across iPhone and Android, which would make it natural to offer Cortana as part of that app on other devices. Cortana is Microsoft’s counterpoint to Siri, which is available only on Apple devices; and to Google Now, elements of which are available as part of Google’s iPhone app, in addition to Android.

One complication is that Microsoft wouldn’t be able to integrate Cortana as seamlessly with the hardware on competing devices as it can on Windows Phone, noted Rob Chambers, a group program manager from Microsoft Research who joined Ash on stage. He cited the example of running the phone in a low-power state to enable an always-on listening experience for quickly activating the virtual assistant.

However, Chambers said he has seen an increase in the Redmond company’s willingness to work with other platforms, beyond Windows, with new CEO Satya Nadella championing a “mobile first, cloud first” strategy.

“There are a lot of investments that Microsoft has already made, and we’re making even more of them in these other ecosystems,” Chambers said. Skype and Office 365 are two prime examples — a sign that independent product groups are embracing the approach.

“But then you have to think, what does it mean for Microsoft as a whole? Microsoft right now is working the best together I’ve ever seen, and I’ve been at the company for 19 years. And so is there a strategy for Microsoft that makes sense, and what role does Cortana play in that particular environment?”

Cortana, currently available as a developer preview, is being rolled out with Windows Phone 8.1 this year. Ash made it clear that team’s focus right now is on getting Cortana used widely on Windows Phones and Bing.com, with these larger questions becoming more important later.