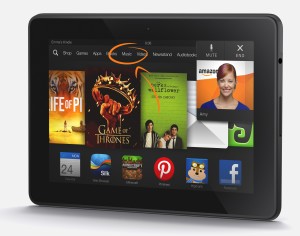 The rumored 3D interface for Amazon’s expected smartphone may get the buzz later this week.

But there is another potential killer feature for those tech-averse consumers.

Eight months ago, Amazon launched the Kindle Fire HDX, and with it, the “Mayday” button, which allows users to connect to a live chat advisor who can help with whatever problem they might have.

Users who tap on the button and wait an average of just under 10 seconds before being connected to a support rep, according to Amazon. Some people have taken that capability to interesting lengths – one person was able to beat an Angry Birds level that had stymied them by hitting the Mayday button.

But most use the service to handle their tech support needs.

If Mayday makes an appearance on Amazon’s rumored smartphone, it could be a huge draw for non-techies. Given Mayday’s popularity — and the fact that Amazon chose to tout its existence just last week —  it seems like a good bet we’ll see an appearance this week.

Smartphones can still be scary to a lot of people, especially those who want a cell phone that can reliably make phone calls.

Mayday would be a lifeline for those people, and Amazon is the only company to offer anything like it. Apple offers person-to-person support in its retail stores, and I’ve always found AppleCare tech support to be helpful. But both of those systems take time to navigate. Getting support from Google or Android handset makers is as difficult.

Mayday, on the other hand, is blissfully simple: push a button, get a human to help you, right away.

If Amazon can bring that same level of service to the smartphone industry, it has the potential to draw in a new market segment who thus far have been either underserved or left behind. As Nintendo showed with the success of the Wii, that strategy can pay off with massive profits and plenty of customers.

An Amazon smartphone has the potential to threaten the smartphone market’s status quo, because it could be the first smartphone to offer a non-technical user the peace of mind to use it with confidence.