Margaret O’Mara, an associate professor of history at the University of Washington, spends her days analyzing the ingredients that make up technology hubs like Seattle and San Francisco.

The author of Cities of Knowledge: Cold War Science and the Search for the Next Silicon Valley sat down with Todd Bishop and John Cook for the latest edition of the GeekWire podcast, talking about her work on the history of the U.S. tech industry.

The wide-ranging conversation — which covered how Seattle’s weather patterns impact innovation, how the government and the Cold War are responsible for the tech industry’s growth, and more — can be found here.

Here are some key snippets from O’Mara’s interview:

On what Seattle has in common with the Bay Area: “What Seattle does have in common with the Bay Area, and I think this is a Pacific Northwest thing, it’s this risk tolerance. It’s this openness to young people with new ideas who may not have that much of a track record. And you can get money for some venture, you can fall flat on your face, and you could go back and ask the same people for funding, and they’d give it to you. So that’s the classic Valley model, is sort of this risk tolerance. And you see some of that here, but not to such a greater degree.”

On how Philadelphia missed the boat to become the hub for the U.S. tech industry: “In 1945, if we were having this conversation, and we were taking bets on what’s going to be the capital of the high-tech universe, the Bay Area, or Greater Philadelphia, you might have said Philly. (It was home to the) first computer science school, the home of the world’s first supercomputer, ENIAC, and money, tons of capital. But one of the missing ingredients was that it was very conservative capital. You didn’t have venture capital in Philly. You still don’t really. It goes against the culture.”

On how Amazon should think about its role in the community: “Amazon was already in the city, but it’s move to South Lake Union has made it so much more prominent, it’s gotten so much bigger. You know, I think Amazon’s at this tipping point in so many ways, it’s going to be one of the state’s biggest employers really soon, in a way, just as Microsoft became a Pacific regional partner in the 90s after it got a certain size, it had to turn outward and think about its goal as a regional citizen. I would imagine — and hope — that Amazon is starting to think that way too. It needs to if it’s going to have such a huge employment base, have so many millions of square feet, there’s a real opportunity to really be a thoughtful partner in this region.”

On rising concerns about inequality and the tech industry: “When high tech was in the suburbs, part of what made it such a suburban phenomenon is that there was this idea that you create these amazing, self-contained campuses, and if you’re sitting in this nice building, looking at a duck pond, you’re going to be inspired to do all sorts of innovative things. That was sort of the idea of the isolation, the separation of these special people.

“And now, that special crowd is being brought back into the city, and sometimes in kind of specially privileged, similarly privileged environments. It’s a neighborhood, but it’s a neighborhood where you have coffee shops and restaurants and businesses and workplaces that are catering to people of a certain income level and a certain skill level. And other people who are there are getting displaced.

“And so that haves and have nots divide that’s been there for a while is becoming both more pronounced and more spacially proximate, so you literally have people next door to each other. Places that are space starved, like San Francisco, it’s only 7 miles by 7 miles, we’ve got this to a certain degree in Seattle, too. There’s only so many places and so many people they can fill, especially when you have, like here, a dislike of high-rise buildings and high-density environments. And so, rents go high, and people get left out.” 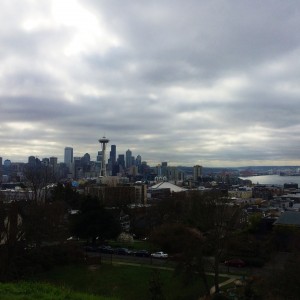 On how Seattle should cultivate innovation moving forward: “One, you invest in people, the basic education equation. You invest in people and think about a broad spectrum of people getting engaged in this innovation economy, kids of color, women, thinking about those equity issues and there are organizations here in Seattle that are working very actively towards that, which is super important. You invest in place, and has everything to do from viaducts or an absence thereof, to just making sure that you have really vibrant neighborhoods.”

On what she wished was included in the Bezos Center for Innovation at MOHAI, where she was the Lead Curatorial Advisor: “There’s this awesome quote, and I’m not going to remember it verbatim, by Sir Mix-a-Lot, where he was talking about how Seattle made him. It was an interview he gave to the P-I, whenever he was hitting number one, and he was like, ‘look, all these other guys are talking about Lamborghinis and Rolexes, and what made me was the evergreen trees and the rain. And that’s where I’m from.'”