Computer scientist Kentaro Toyama is a former Microsoft researcher who co-founded the company’s India research lab, working in the country for many years before becoming a UC Berkeley visiting scholar. He’ll join the faculty at the University of Michigan School of Information next year.

His current project is a book called “Geek Heresy: Rescuing Social Change from the Cult of Technology,” based on what he learned over the past decade, much of it with Microsoft Research, exploring how digital technologies can support the socio-economic development of very poor communities.

“After 50+ projects, I saw that what mattered much more than the design of technology was the intent and capacity of our partner organizations — the better they were, the better the technology also worked,” Toyama explains. “So, I came away thinking that technology mattered a lot less than human forces.”

He adds, “I think maybe I should be the Anti-Geek of the Week.”

We disagree. Meet our new Geek of the Week, and continue reading for his answers to our questionnaire.

What do you do, and why do you do it? My research focuses on what happens at the intersection of technology and human development. But given what I said above, I’m more and more interested in human development for its own sake. Technology is terrific, and it’s helped the rich world come far, but in the end, there’s no real progress without change in people.

What’s the single most important thing people should know about your field? People think that technology is necessarily good, or increasingly as we watch our friends and family become distraction-addled dunderheads, necessarily bad. But, neither view is correct for the simple reason that it’s people that create and use technology. For the most part, technology amplifies underlying human forces. If we’re good, it’s good; if we’re bad, it’s bad; if we’re conflicted, it’s conflicted.

Where do you find your inspiration? As I was doing research for my book, I ran into a lot of profound thinking that all seemed to have happened in the middle of the 20th century. Abraham Maslow’s ideas about human development, Walt Rostow’s stages of national growth, the revival of virtue ethics in philosophy… Those ideas had their flaws, but they explained grand phenomena in broad strokes that, in many ways, go much farther than a lot of today’s scholarship.

What’s the one piece of technology you couldn’t live without, and why? To interpret that question literally, I couldn’t live without modern agriculture, plumbing, shelter, and transport. I’d be dead within a few days without those things. I’m a computer scientist and an academic — I can code and write papers, but I can’t grow my own food; dig my own well; build my own house; etc… In other words, I can’t generate anything that human beings need to live! 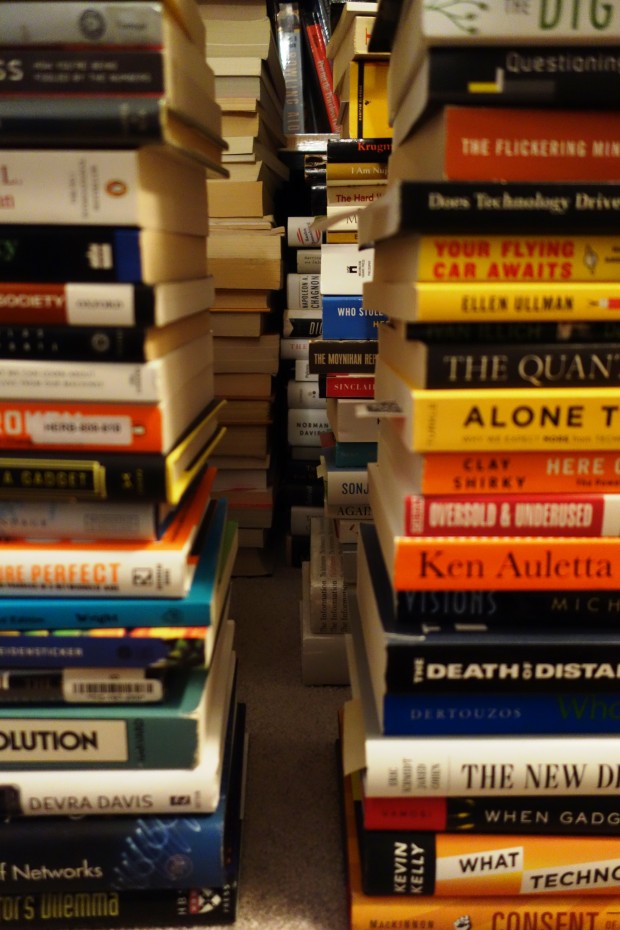 What’s your workspace like, and why does it work for you? My desk is a mess, and all around me on the floor there are piles of books. I imagine heaven is like this, but my desk would be cleaner.

Your best tip or trick for managing everyday work and life. (Help us out, we need it.) The mobile phone I own is a ratty old Nokia phone from 2004 with only voice and text. It’s the only mobile phone I’ve owned in America. It’s got great battery life — lasts almost a week, if I don’t make many calls — so I don’t have to keep worry about charging it. And, it’s not a smartphone, so I’m not constantly distracted by texts and tweets and e-mails. People don’t expect me to respond right away. I highly recommend it.

Mac, Windows or Linux? I used to work for Microsoft. Never kicked the habit.

Transporter, Time Machine or Cloak of Invisibility? Immortality — if you can’t beat death, what’s the point?

If someone gave me $1 million to launch a startup, I would … hire someone to manufacture quadcopters that hover around you and take candid photos automatically.

I once waited in line for … the Sistine Chapel. It was a very, very long line. But worth it.

Your role models: Marcus Aurelius — he was a true philosopher king.

Current Phone: old Nokia, as above

Favorite App: Am I old if I say e-mail?

Favorite Cause: Read my book when it comes out, May 2015!