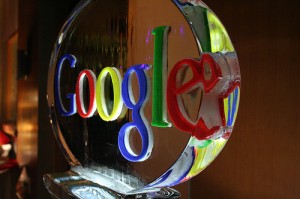 Google announced today that its revenue for the fourth quarter of 2013 was $16.68 billion, up 17 percent year-over-year, along with earnings of $12.01 per share. The company’s profit for the quarter was $4.1 billion, up from $3.57 billion in the year-ago quarter.

The company beat expectations from the Thomson Reuters survey of financial analysts, which projected that the company would bring in almost 16.8 billion in revenue but missed earnings expectations of $12.20 a share.

Advertising revenue made up 90 percent of Google’s total revenue for the quarter, compared to 94 percent during the same period a year ago. The price of Google’s ads remains under pressure, with cost-per-click falling 11 percent year-over-year and 2 percent quarter-over-quarter.

“We made great progress across a wide range of product improvements and business goals,” Google CEO Larry Page said in a press release. “I’m also very excited about improving people’s lives even more with continued hard work on our user experiences.”

The news comes just a day after the company announced that it had reached an agreement to sell Motorola Mobility to Lenovo for $2.91 billion. Google purchased the smartphone maker less than two years ago for $12.5 billion.

While Motorola will be leaving the company, Google will be getting a new hardware team, thanks to its acquisition of Nest, a home automation company run by Tony Fadell, who previously headed up the iPod team at Apple. Google agreed to buy Nest for $3.2 billion earlier this month.

As of this writing, Google’s stock is up less than one percent in after hours trading.

See below for a detailed look at Google’s finances: