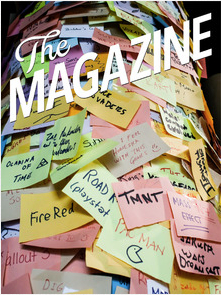 Fleishman, who took ownership of the app in May 2013, shut down the publication mainly due to decreasing subscriptions that were caused by the surge in free, long-form content available today online.

“We don’t see this as a failure, but as the right time,” Fleishman wrote in this blog post.

Fleishman told GeekWire that The Magazine, which has been profitable since its inception, peaked at 35,000 monthly subscribers but gradually declined to around 5,000 per month.

“We moved from sustainable to barely profitable,” he said.

Back when The Magazine was founded in October 2012, Fleishman noted that there was a thirst for lightweight magazine apps, and there wasn’t a whole lot of long-form journalism available online. That has since changed, with venture-backed media companies like Buzzfeed churning out detailed articles that are available for free to readers (The Magazine charged $1.99 per month).

“I’ve actually been fighting for writers, because my best contributors are always busy with higher-paying or longer-form work for sites,” Fleishman said.

Problems with Apple’s Newsstand and increasing back-end app development costs also hurt The Magazine. Supplementing the publication with ads didn’t make sense financially for Fleishman since the app’s scale was so small, and the only other option was to raise capital — something that wasn’t going to happen. Fleishman also did not want to cut salaries of the writers, photographers, and illustrators who produced content for The Magazine.

“We’ve reduced the scope of some stories and we dropped from five features an issue to four several months ago to trim expenses, but as freelance writers ourselves we don’t feel right in paying pittances and working people hard just to keep this ship afloat,” he wrote in the blog post.

The Magazine will officially shut down on Dec. 17. For now, Fleishman is raising money on Kickstarter for The Magazine’s Year Two Book, a physical collection of the publication’s stories from the last year. He’s pro-rating existing subscriptions and hasn’t quite decided whether to make the story archives on the publication’s website 100 percent free or leave them as is “to allow single-issue back-issue sales.”

“It’s also possible someone will want to buy the archives and name and do something with it, and I’m open to that if writers’ interests are protected,” Fleishman noted.

Fleishman said he plans to continue writing for the Economist, Macworld, and other publications as a freelancer. We talked to Fleishman about The Magazine last year on our podcast, and you can listen to that here.