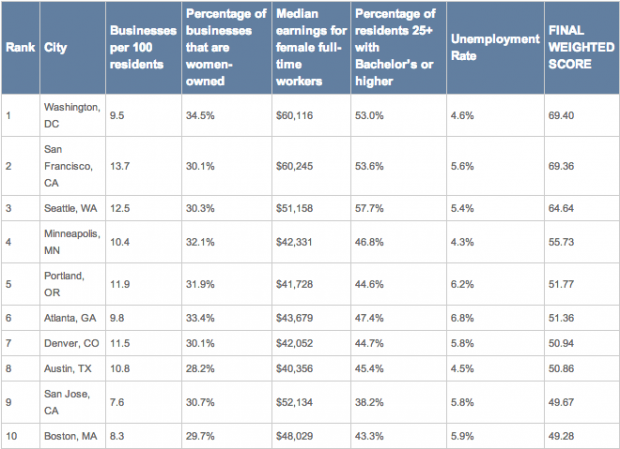 Washington D.C., San Francisco and Seattle — these are the places to be if you’re a woman and want to start a business.

That’s according to NerdWallet’s latest look at the best cities for female entrepreneurs. The personal finance site based their findings on five variables, with stats coming from the U.S. Census and Bureau of Labor Statistics:

1. Business-friendliness: The number of businesses per 100 residents to assess a city’s entrepreneurial climate.

4. Education level: The percentage of residents 25 years and older with a bachelor’s degree or higher.

Seattle finished third on the list, ranking highest among the top 10 for percentage of residents 25 and older with a bachelor’s degree or higher. Here’s what NerdWallet had to say about the Emerald City:

Seattle is one of the most educated cities in the U.S., with nearly 58% of its residents holding a bachelor’s degree or higher. This correlates well with the city’s high median salary for women and relatively low unemployment rate. Seattle has 12.5 businesses per 100 residents, which is one of the highest such figures of all cities. Local resources for entrepreneurial women include Women Business Owners and Women’s Business Exchange, both of which are active networking committees that help connect women in business.

According to the National Association of Women Business Owners, 8.6 million firms that employ nearly 7.8 million people are owned by women. In addition, the number of women-owned firms has increased by 59 percent from 1997, and today, 29 percent of all businesses are owned by women.

However, this study notes that women-owned firms only employ 6 percent of the country’s workforce and contribute less than 4 percent of business revenues — statistics that haven’t changed much since 1997.

There is also the issue of women in tech — or rather, the lack thereof. For example, just six percent of CEOs at the top 100 tech companies are women, while just over 10 percent of all venture capitalists are female.

Partovi noted that it is actually different three decades ago, when young women earned 37 percent of computer science degrees, compared to 18 percent today.

“Computer science is for every 21st century student,” Partovi writes. “How do we start making that a reality? Simple. Teach it in our schools. Show girls that other girls are trying it too.”

“We put on the event to inspire the girls to become entrepreneurs, technologists, and business leaders in our community,” Pearce said.

What do you think? Is the lack of women in tech a big problem, and if so, what can be done to fix it?