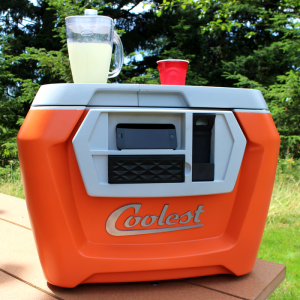 Ryan Grepper tried raising $125,000 on Kickstarter last year for his geeked-out cooler, but fell just short. He decided to give it another shot again last month and, well, let’s just say the second go-around turned out a little bit better.

Grepper has raised nearly $9.2 million on Kickstarter from more than 46,000 backers for his “Coolest Cooler,” and there are still seven days remaining on the campaign. It’s currently the second-most funded product on Kickstarter ever — the funding goal was $50,000 — and has a chance to pass the $10.2 million raised by Pebble in 2012.

We caught up with Grepper, who runs an online training program called Inventors Blueprint, and asked him how the heck he’s raised so much money for his “party in a box” invention that features a built-in bluetooth speaker, USB charger, blender, cutting board, bottle opener, and more.

“When I launched my first campaign for the Coolest last November, I thought that if you started with a good enough idea, people would find it and success was inevitable,” said Grepper, who’s based in Portland. “When the campaign failed, I took a hard look at what went wrong. I did not give up.”

Grepper outlined three crowdfunding strategies that he’s learned over the past year:

1. Kickstarter is a very visual medium. “I needed to advance the design of the Coolest prototype to best showcase my vision,” he said. “I advanced the design and am thrilled that folks are connecting with it.

2. Time of year really does matter. “It sounds obvious now, but launching a product when backers are most likely to be receptive makes a difference,” Grepper noted. “I thought we could appeal to tailgaters and Christmas shoppers in November, but that did not work. Re-launching in July has been perfect because people are in the frame of mind to consider a cooler.”

3. It’s critical to develop a following before the campaign. “I was encouraged that there were people who showed interest in the Coolest and we worked hard to nurture and grow that excitement in between our first and current campaign,” he explained. “By the time we launched we had a core group of interested backers and I can’t believe how that excitement has grown. I am beyond grateful for every single backer.”

Grepper said he’s “humbled by the demand” and has been able to focus on production now that his campaign has hit its funding goal.

“This has been an amazing month,” he said.

Grepper plans to ship out the coolers this February. Thanks to the popularity of his invention, he’s been receiving quite a few pitches for other projects. But for now he’s all about the cooler.

“I am honored by some of the exciting ideas coming my way, but right now I am laser focused on delivering the Coolest Cooler on time to my amazing backers,” Grepper said. “I won’t rest until I do just that.”