When GeekWire sat down with then-Seattle Mayor Mike McGinn just about a year ago in his City Hall office, the 54-year-old explained how he thought government could help startups. 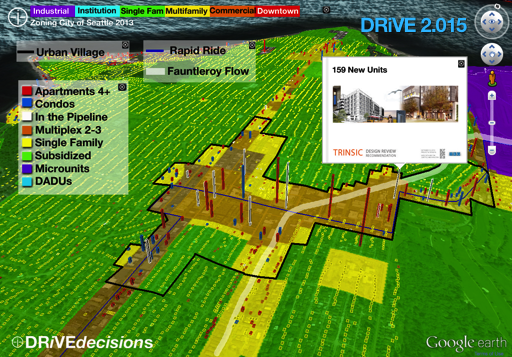 What a difference one year makes — now, 11 months later, McGinn is working at a startup that’s trying to help government leaders.

In his new part-time role, McGinn — who lost a re-election bid last year to Ed Murray — will work with government officials and foundations that may be interested in using the digestible information and visualizations DriveDecisions offers.

“Lots of communities are concerned that they are being shortchanged by government, and many are,” McGinn told GeekWire. “This type of tool can put real information into the hands of the public and decision-makers, and hopefully that transparency can drive greater equity. I also believe it can help governments make smarter decisions with limited resources. ”

DriveDecisions has developed software that processes live data from community, city, county, state, and regional agencies that is stored across multiple websites in different formats. The end result is a virtual environment that investors, developers and commercial real estate professionals pay to access.

But now the three-person startup wants to help city leaders make more informed decisions, too. DriveDecisions founder Luis Borrero said that helping government officials and the public understand complex issues that affect city development has been his goal all along.

“When Mike first saw this tool, his first thought was, ‘Wow, I could have used this in office so much,'” said Borrero, who also works with the Seattle Planning Commission. “It helps departments make quicker decisions instead of trying to understand information. In my experience, they spend 90 percent of their time trying to understand data instead of shaping their decision. The more we can do to inform people upfront, the better it is.”

McGinn brings a wealth of experience from city government and a valuable rolodex. During his time as mayor, McGinn made a series of moves to help the region’s entrepreneurs. He brought together industry leaders for an startup roundtable in 2012, and then launched a “Startup Seattle” initiative one year later to support the Seattle tech startup community and make the city recognizable around the world as a thriving startup ecosystem.

Since losing the mayoral election to Murray, McGinn said he’s done some speaking, helped fossil fuel divestment advocates around the nation, and has been “otherwise enjoying life.”

With DriveDecisions, McGinn wants to convince city leaders to invest in tools that help citizens make use of open data.

“I really like the DriveDecisions product because if we could get cities to adopt it, it would really help with equity and sustainability,” he noted.

McGinn said he’s not running for City Council next year. As for races in the future? “One never knows,” he said.