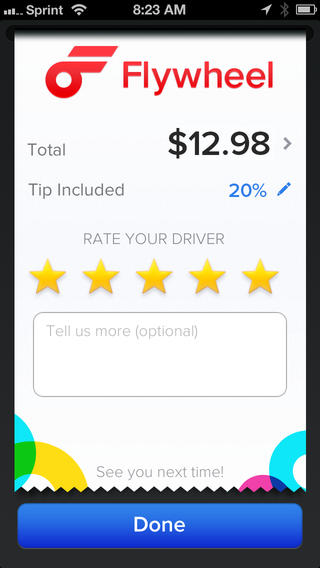 If you dislike surge pricing and want to hail a ride from your smartphone on New Years Eve, Flywheel might be a decent option.

The hailing app for taxi drivers announced today that it is offering $10 flat-rate rides on Wednesday evening in Seattle and San Francisco. It will offer the same deal in Sacramento and San Diego — two cities that Flywheel just launched in this week.

“Last New Year’s Eve people were charged up to seven times the normal rate by other services – not cool!” Flywheel wrote in a blog post. “This New Year’s Eve is all about the Benjamins (staying in your wallet).”

Those “other services” is a call-out of Uber, which employs a surge pricing strategy to help encourage more drivers to work when demand from riders is high. The technique sometimes leads to unexpectedly high fares and many customers complained to Uber for bills that ran near $400 for relatively short rides, despite the fact that Uber notifies its users when surge pricing is in effect.

Flywheel’s deal lasts from 8 p.m. PT on Wednesday until 3 a.m. on Thursday. Flat-rate rides that cost more than $50 will be charged the metered balance. So, if your metered total comes out to $60, you’ll pay the $10 flat rate for the first $50, plus the difference — a grand total of $20.

The company is also giving its drivers an extra 100 percent tip for each ride.

“Our #SurgeFreeNYE program is an opportunity for Flywheel to showcase our commitment to Flywheel passengers by giving $10 flat rate rides on the busiest night of the year when other transportation apps are using exploitive surge pricing tactics,” CEO Rakesh Mathur said in a statement.

Uber will almost certainly be applying its surge pricing throughout Wednesday night and into Thursday evening as demand is expected to be high. The company said today it expects to provide two million rides worldwide on New Years Eve.

Flywheel is like Uber and Lyft in that it builds software that helps drivers and passengers connect with GPS tracking and mobile payment processing. However, the company partners with both taxi fleets and drivers who pay Flywheel 10 percent of every fare booked with its app, in addition to a $1 service fee from the passenger. Uber, meanwhile, has declared a war against the taxi industry.

Flywheel says its technology is now in 80 percent of San Francisco taxis and has seen a 400 percent increase in app downloads since last month. The company raised a $12 million Series C round in November — while also announcing a new executive team led by Mathur — that pushed total funding past $34 million.