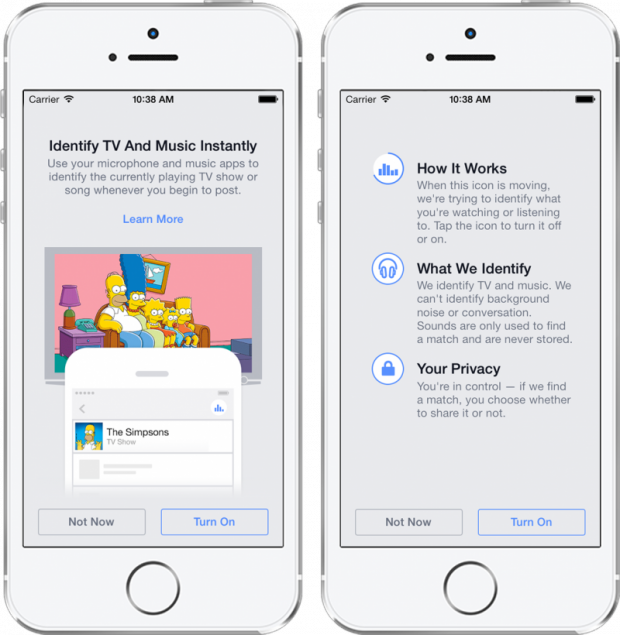 Facebook users are going to see a more music- and TV-filled News Feed soon. The company announced today that it is going to update its apps for iPhone and Android with the ability to detect what music, TV show or movie is playing around someone who’s tapping out a status update. Users who turn on the service will be able to add that information to their status update, without having to type it out.

Here’s how it works: when a user with the service enabled goes to post a status update from their iPhone or Android device, the Facebook app starts listening to see if it can recognize anything. Users are then given the choice of whether or not they want to attach the detected piece of media, so people can keep their Kitchen Nightmares addiction a secret from their friends. Here’s a video that demonstrates the feature:

Music lovers who attach their currently playing song to an update will automatically embed a 30-second preview so that their friends can hear what’s playing, and TV watchers will see that the service knows what season and episode of a TV show they’re seeing. It’s similar to the music recognition service offered by Shazam, an app that’s designed to let smartphone users know what song they’re listening to.

It’s an opt-in service, so people who don’t want Facebook listening while they type status updates don’t have to enable the functionality unless they want it.

Today’s announcement is another attempt by Facebook to try and take on Twitter’s traditional strengths. The ability to identify particular TV episodes would give production companies a better idea of what shows are being discussed on the social network and when, which could provide more specific insights than what Twitter can offer. What’s more, the passive collection of

Facebook has been hard at work over the past year to try and convert people to its platform who would traditionally rely on Twitter for social insights and promotion. Earlier this year, the company announced a new content aggregator to try and make it easier for journalists to find information and images about news events shared on the social network.