There were audible gasps from the Urban Land Institute audience last week when Amazon real estate director John Schoettler delivered the stat: Amazon is growing so quickly that it needs developers to build 30 new residential buildings in and around downtown Seattle, with at least 200 units each, just to accommodate its employees in the coming years.

That translates into 6,000 residential units — representing nearly 60 percent of the new housing units currently planned in downtown Seattle and nearby neighborhoods including South Lake Union, home to Amazon’s headquarters; and the Denny Triangle, where the company has started construction on what will ultimately be a new, four-block office campus.

“I was surprised to hear this so directly and succinctly from Amazon,” said Kelly Mann, the Urban Land Institute Northwest executive director, one of several people who recounted the meeting for GeekWire. “But it really makes sense in light of the company’s tremendous growth to date and their plans for continued hiring.”

That growth also brings tremendous risk, essentially requiring the city to place a bet on Amazon’s continued success and growth — with a huge portion of the city’s workforce and residential population depending on it.

Despite testing Wall Street’s patience with a lack of consistent profits, the company has been hiring at a rapid pace over the past several years — adding a net total of nearly 40,000 employees globally in just the past year. 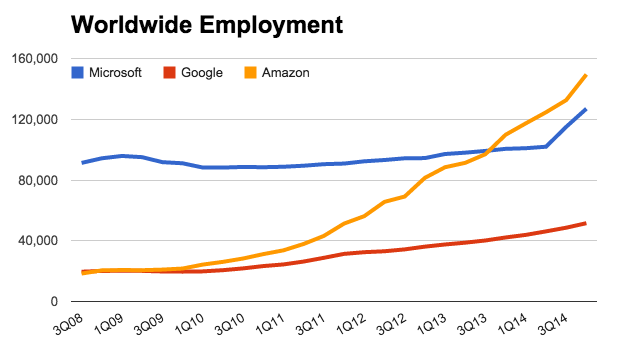 Amazon has purposefully focused its growth in Seattle’s urban core.

“We could have built a suburban campus. I think it would have been the wrong decision,” said Amazon CEO Bezos at the company’s annual shareholders meeting this year. He said the types of people Amazon employs and tries to recruit “appreciate the energy and and dynamism of an urban environment.”

It’s also better for the city of Seattle and the planet, he said. “I think it’s pretty much indisputable that urban campuses relative to suburban campuses are better because there’s much less commuting and much less fuel burned,” with many people choosing to live near work.

The comments by Amazon’s Schoettler at the recent Urban Land Institute meeting were referring, in part, to a transportation management program that lays out guidelines for housing within walking distance of new offices.

Those benefits aren’t in dispute. But in addition to the rapid pace of Amazon’s growth in the urban core raises larger questions about affordable housing and transportation infrastructure, and the ability of the city to keep up. Based on the company’s existing and planned space, the Puget Sound Business Journal estimates that Amazon will have enough space for a total of 70,000 employees in Seattle by 2019.

In a widely read post on GeekWire last week, commentator Jeff Reifman cited many of these issues, in addition to the economic risk of Amazon’s rapid growth. What happens, he asked, if Amazon collapses?

“It’s unlikely but not completely outside the realm of possibility,” he wrote. “Any sudden broader economic downturn could hurt the retailer’s cash flow which is the lifeline to Seattle’s current growth. For the foreseeable future, Seattle’s prospects will rise and fall with Amazon.”

Despite the risks, real estate experts say the city will be able to handle the growth.

“Realizing that the infrastructure always lags a little, I can’t think of a better place to put jobs,” said A-P Hurd, a vice president of developer Touchstone Corp., who moderated the panel on which Schoettler spoke.

Mann, the ULI-Northwest executive director, noted that Seattle ranks third nationally for real estate development and fourth for investment, underscoring the overall health of the market. “We are very fortunate to have such strong job growth in our region,” Mann said.

“At the end of the day, jobs drive real estate value, and what we heard from John Schoettler … was that Amazon is hiring and their new hires need places to live,” Mann said. “This demand will support a healthy housing market for the foreseeable future. Yes, there is capacity for 30 new multi-family projects downtown and in close-in areas, and there are plenty of developers vying to satisfy that demand.”