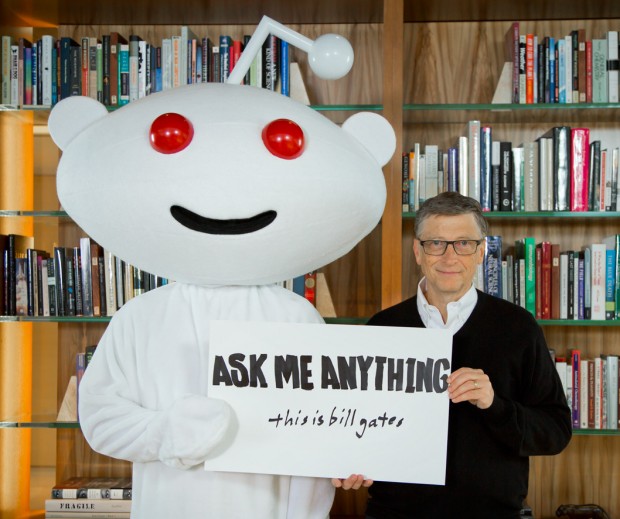 One year after conducting his first Reddit Ask-Me-Anything (AMA), the Microsoft co-founder is back on the keyboard today answering questions from Redditors around the world.

He just started the Q&A session 30 minutes ago, and already people are asking about his new role at Microsoft. Announced last week, Gates will be a technology advisor to new CEO Satya Nadella and is stepping down as Microsoft chairman — although he’ll now be spending more time in Redmond with his new gig (one-third with Microsoft, two-thirds with his foundation).

Here’s how Gates described the role today on Reddit:

I am excited about how the cloud and new devices can help us communicate and collaborate in new ways. The OS won’t just be on one device and the information won’t just be files – it will be your history including being able to review memories of things like kids growing up. I was thrilled Satya asked me to pitch in to make sure Microsoft is ambitious with its innovation. Even in Office there is a lot more than can be done.

And here’s how he responded to “Bill, I gotta ask you, what would you say you do there?

I make sure we pick ambitious scenarios and that we have a strong architecture to deliver on them. I encourage good work (hopefully).

Gates is answering tons of other questions right now, from his most expensive guilty pleasure (his jet), to the tablet he uses right now (Surface Pro 2 — “It works well for me,” he says) to how he’s different from 20 years ago:

“20 years ago I would stay in the office for days at a time and not think twice about it — so I had energy and naivete on my side,” Gates wrote. “Now hopefully I am a bit more mellow but with a little extra wisdom.”