Music fans who can’t make it out to this year’s Bonnaroo Music and Arts Festival in Tennessee will be able to get the concert experience delivered to their television screens, thanks to Microsoft.

The move is a part of Microsoft’s increasing push to turn the Xbox into a media hub for the home, rather than just a gaming console. The company plans to launch its first foray into original television programming in the first half of this year, and Microsoft is continuing to sign other content partners to provide more video for its consoles. 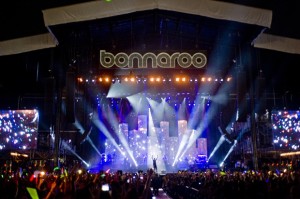 “Bonnaroo transcends the festival weekend, and with Xbox, we’re creating a virtual destination befitting the live experience,” Bonnaroo co-founder Jonathan Mayers said in a press release. “This partnership shows our commitment to serving our global community with innovative Bonnaroo content year round.”

That year-round content kicks off with the announcement of Bonnaroo’s lineup, which will be streamed over Xbox Live later this month. The announcement will include a “SuperJam” featuring The Flaming Lips and Ben Folds.

The music festival is no stranger to online streaming. YouTube has hosted multiple video streams of Bonnaroo in the past, though it’s not clear if the Google-owned online video company will also have a stream this year. If Microsoft has managed to wrest streaming rights of the popular music festival away from YouTube, that’s a significant coup for both the company and its ambitions towards broader media dominance.

Google declined to comment on whether or not YouTube will also be hosting another stream of this year’s event.