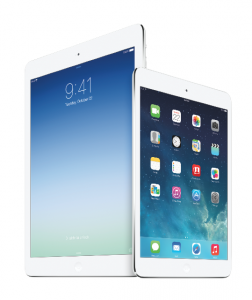 Reading a book at the beach on an iPad may be a more pleasurable experience once Apple updates its tablet later this year.

The next revision of the iPad Air will feature a screen with a new anti-reflective coating, Bloomberg reported today. According to two people with knowledge of Apple’s manufacturing plans, new versions of the successor to the iPad Air and iPad Mini are both entering production this month, with releases of both targeted for later this year.

Other details about the devices’ capabilities are scarce, though past rumors have indicated it’s likely they’ll be given Touch ID fingerprint sensors to match the iPhone.

The manufacturing schedule should hardly come as a surprise, considering that Apple usually refreshes its tablet lineup once a year in October, just in time for the holiday shopping season. But a screen that better fends off glare could be an interesting competitive advantage for the iPad, which is competing with more tablets for customers’ dollars.

People who want to read e-books outdoors usually turn to Amazon’s Kindle devices, since the company’s e-ink displays perform better when out under the sun. But Apple’s new anti-reflective coating could shave off some of Amazon’s competitive advantage in that regard.

In turn, that could give iPad sales a much-desired boost. The tablet market isn’t growing at the same rapid clip it was even a year ago, which has worried observers and Apple shareholders. In his past two quarterly conference calls with financial analysts, Apple CEO Tim Cook has appeared unconcerned about the iPad’s lack of growth, but that hasn’t been enough to assuage the fears of anxious investors and analysts. A new set of iPads could provide a shot in the arm to Apple’s tablet sales.