Amazon’s first smartphone isn’t setting the world on fire, judging from the company’s own rankings.

Less than two weeks after Amazon CEO Jeff Bezos unveiled the device, the Amazon Fire Phone has plummeted on the company’s list of bestselling electronics across Amazon.com.

Today, Amazon’s 32 GB model is ranking as the 61st best-selling electronic, far below its fourth-place position two days after the phone’s June 18th unveiling. Furthermore, the 64 GB model does not make an appearance at all, suggesting that sales for the larger capacity model are even more dismal.

Amazon’s top 100 list ranks the most popular electronics based on sales, and is updated hourly, so the list can fluctuate. For instance, Amazon’s phone ranked in the 49th spot earlier this morning.

When looking at Amazon’s bestselling list under phones being sold with a contract, sales look a lot more promising. The Amazon Fire Phone, with 32 GB of storage, is the No. 1 bestseller, and the 62 GB version places ninth.

That means the Fire Phone is currently hotter than some Samsung phones, like the Galaxy S5, but it’s nowhere close to being as popular as Amazon’s Kindle Paperwhite e-reader, or even the recently introduced Kindle Fire TV, as the more encompassing electronics bestseller lists suggests. It’s also important to note that Amazon does not sell Apple’s iPhone under contract.

We emailed a spokesman for comment, but did not immediately hear back.

The smartphone’s rapid fall may suggest that sales are tapering off as we get further away from the announcement, especially since the phone, which costs $199 on contract with AT&T, does not start shipping until July 25.

But given Amazon’s strength as a retailer these are pretty disappointing results. Since the day of its announcement, the Fire Phone Amazon has been given heavy promotion on the retailer’s homepage. Currently, when I’m logged in, I see a five-inch by eight-inch banner advertising the device as “the only smartphone with dynamic perspective.” An image of the phone with one of a 3D wallpaper is displayed next to the text.

Despite pushing the phone to its fullest abilities, sales aren’t going gangbusters, and it could be for any number of reasons. 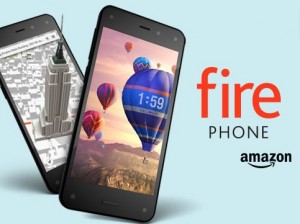 Critics have argued that the phone is being hampered by poor distribution, thanks to an exclusive with AT&T. Others might find the offerings a little too obscure and geeky. Dynamic Perspective, if you didn’t know, gives the viewer a sense of depth on the screen, similar to 3D, changing the perspective depending on the angle of the user’s head. It also provides the user with the ability to navigate the phone through a series of hand gestures.

Another feature, called Firefly, scans and recognizes objects, allowing you to save a web address or a product that you want to buy.

But everything usually comes down to price, and while Amazon is willing to throw in a year of free Prime, worth $99, it failed to offer something really compelling, like disrupting how consumers pay for voice and data.

One major caveat to place on this list is that the phone is also being sold by AT&T in its stores and online, and since the phone requires a voice and data plan, consumers might find it easier to make the purchase directly from their carrier,  and not from Amazon.

It’s also worth pointing out that the Amazon says the Fire Phone is the No. 1 most wished for item on customers’ Amazon Wishlists and registries. So, maybe people are waiting to order the device closer to its availability?

We’ll be watching the best-seller list in the weeks to come to see if that’s the case.