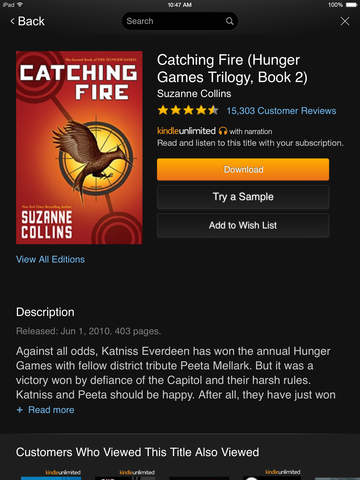 Users of Apple’s mobile devices now have access to a variety of new features in Amazon’s Kindle app for iOS, thanks to a massive update the Seattle-based company pushed out today.

Speaking of Goodreads, this update also brings greater integration with the social network. Users can now update Goodreads with their progress through a book by tapping a button in the navigation controls, and easily share quotes to the network. When they finish reading, the Kindle App will prompt them to rate the book on Goodreads, if they’re signed in.

The app also makes it easier for people to read a book series in order. Once readers reach the end of one book in the series, they’ll be prompted to add the next one to a wish list. They won’t be able to buy it, though, since Amazon refuses to sell books through Apple’s in-app purchase system — giving Apple a cut of its sales. Once users download a book, they’ll be able to see the information Amazon has collected on it by tapping and holding on the book’s cover in their library, which will pop up a plot synopsis, reviews, and more information about the text.

Users of Kindle Unlimited, Amazon’s monthly e-book subscription service, will finally be able to get around the company’s refusal to sell Kindle books on Apple’s platform. They can now directly download applicable books through the Kindle app, without having to go through Amazon’s storefront.

In addition to all the improvements to the reading experience, today’s update also brings support for Audible Progressive Play, so people can start listening to an audiobook they purchased as it’s downloading without having to wait for the whole multi-hour audio file to come in.

The update comes near the end of the holiday shopping season, which is prime time for sales of products from both Amazon and Apple.