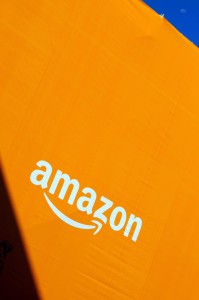 The company posted net sales of $25.59 billion in the fourth quarter, up 20 percent from the same quarter a year ago, but short of the more than $26 billion in sales expected by the analysts polled in advance by Thomson Reuters. Earnings per share of 51 cents missed expectations by 15 cents based on the Thomson survey, or as much as 18 cents according to other analyst surveys.

The company’s shares are down 10 percent in after-hours trading to $362.50 as of 1:30 p.m. Pacific time. Here’s the company’s full earnings release:

“It’s a good time to be an Amazon customer. You can now read your Kindle gate-to-gate, get instant on-device tech support via our revolutionary Mayday button, and have packages delivered to your door even on Sundays,” said Jeff Bezos, founder and CEO of Amazon.com. “In just the last weeks, Forrester, YouGov, and ForeSee have all rankedAmazon #1 – and we believe we’re just scratching the surface of what world-class customer service can be.”

Net sales increased 22% to $74.45 billion, compared with $61.09 billion in 2012. Excluding the $1.28 billionunfavorable impact from year-over-year changes in foreign exchange rates throughout the year, net sales grew 24% compared with 2012.

Operating income increased 10% to $745 million, compared with $676 million in 2012. The unfavorable impact from year-over-year changes in foreign exchange rates throughout the year on operating income was $29 million.

The following forward-looking statements reflect Amazon.com’s expectations as of January 30, 2014, and are subject to substantial uncertainty. Our results are inherently unpredictable and may be materially affected by many factors, such as fluctuations in foreign exchange rates, changes in global economic conditions and consumer spending, world events, the rate of growth of the Internet and online commerce, and the various factors detailed below.