Walking through our local Fred Meyer store, we approached the wall of toasters with a gleam in our eyes, holding an Amazon Fire smartphone. 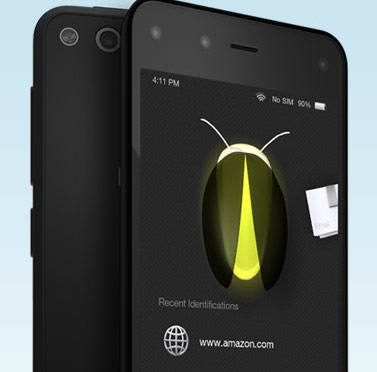 With one long push of the button on the left side of the device, the Fire phone sprang to life — using its camera and special software to instantly recognize the Black & Decker 4-Slice Toaster on the shelf, and then quickly find the same product in Amazon’s catalog.

Three clicks later, we had used the phone to buy the toaster from Amazon for $39.99 — $10 less than Fred Meyer’s price — to be delivered to our doorstep in two days with free shipping, thanks to the one-year Amazon Prime subscription offered with the device.

This feature is called Firefly, and it’s one example of the disruptive potential of Amazon’s new smartphone, scheduled for release this week.

Our experiment in rapid-fire showrooming was part of our broader review of the device, which sells for $199 with a two-year AT&T contract.

See the video above to see more from the Fred Meyer experiment, with GeekWire’s Taylor Soper using the Fire phone to recognize and price-check a wide variety of products.

The Firefly feature does more than recognize products. It also can also identify music, and specific scenes in television shows, in addition to tricks such as recognizing a url or phone number using computer vision. Third-party apps can also integrate with Firefly in a variety of ways — letting you click to purchase or download a song, for example.

In our testing at Fred Meyer, the Firefly was accurate the majority of the time, although there were a few times when it misidentified a product. We found that it was most reliable when scanning the barcode, although there were times — as with that Black & Decker toaster — when the image recognition was so good and fast that it surprised us.

We scanned everything from toys to sporting goods to home appliances and even cereal. In many cases (but not all), the products were available for less on Amazon, and eligible for Amazon Prime two-day shipping.

See our broader review for much more on our experience with Amazon’s Fire phone.