If you’re a squirrel, make sure you stay well clear of Rich Barton. The founder of Expedia and Zillow on Wednesday offered some key advice from his dad, applying a driving lesson from the road that he’s used in business to this day. 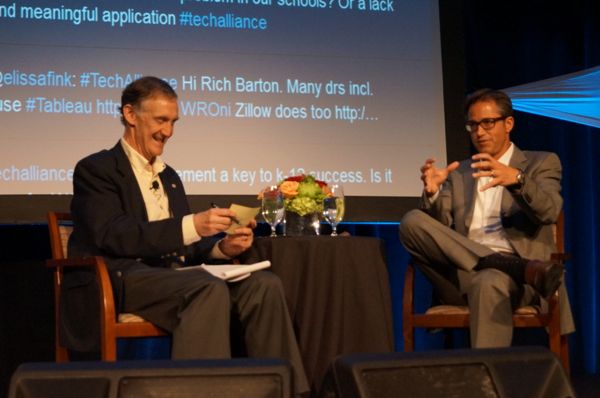 “My dad used to say: ‘kill the squirrel,'” noted Barton. In other words, don’t swerve out of the way or change course just because a pesky little creature gets in your way. In most cases, he added that “the squirrel will get our of your way.” (Minute 11 in recording below).

That was just one nugget of wisdom from Barton as he spoke during a Q&A discussion with University of Washington computer science professor Ed Lazowska at the annual Tech Alliance luncheon in downtown Seattle. In the wide-ranging talk, Barton touched on everything from the disruption in online education to the lack of women in computer science to why he supports a statewide income tax — a political statement that drew very light applause.

“That’s why it got slaughtered,” said Barton after hearing the applause, making reference to the resounding defeat of I-1098 which would have imposed an income tax on the super wealthy like Barton. (13 seconds in Part 2 of recording below)

Without better educational resources in the state, Barton said the fire of innovation will die out.

“What I’ve watched over my 23 years here in the startup ecosystem is that this fire, which was a little tiny fire when I got here, kind of the heritage of Boeing and Microsoft was just getting going … I’ve watched this fire spread in all different sectors now, and it is burning really brightly now. I think that it is our job to keep feeding this fire, so that it continues to spread. And the essential ingredient, obviously, is brains. We have to raise more brains to put in the fire. And money, we need money in the fire. We need educational capacity. We need public education … to keep this fire burning. Otherwise, the fire will go out.” 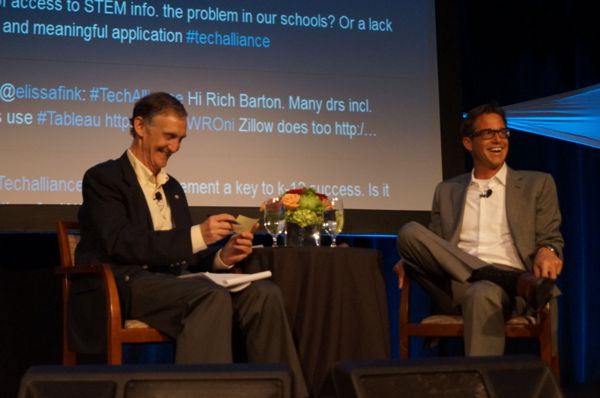 Asked what made the biggest difference in his own education, Barton didn’t hesitate: “Great teachers.”

“It’s about the teachers, and that is obviously a place that we are failing,” he said. Better teachers, he said, could spark more ideas.

“Our whole economy is based on the velocity of ideation,” he added. “It’s an organic system. We have to have more ideas being contemplated by more people, more solutions being created by more people way, way out in the leaves.”

As one of the only tech entrepreneurs in Seattle to lead two large multi-billion dollar publicly-traded companies, Barton also stressed the importance of long-term thinking.

He described how there are “no quick fixes” in life and how short-term orientation can cause all sorts of problems, noting that Tableau will now face this as a new publicly-traded company. “Welcome to the club, guys,” said Barton, who helped guide Zillow to the last tech IPO in the state in July 2011.

“Great leaders and great management teams do not succumb to the pressure from short-term oriented shareholders,” Barton said. “The best thing to do is move away from the noise, sit down with the people you trust and plot a course for the long-term. That is the way real value is created.” 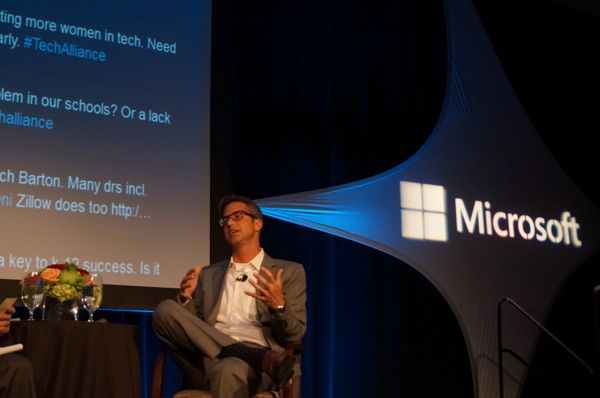 Barton was also asked who he’d like as mentors, and the tech veteran didn’t have to go too far to find answers, pointing to Bill and Melinda Gates, Steve Ballmer and Jeff Bezos. “It is hard to fathom the competitive intensity that Bill & Melinda (Gates) have brought to curing polio and saving lives. That same competitive intensity that was focused on killing Sun, back in the day, or maybe I should say Netscape. Bill is a great mentor.”

Barton also noted the achievements of Bezos, the Amazon.com founder. “He is a bit of an monomaniacal-focused fellow, but one of the most creative, strategic business thinkers and innovators of our generation, I think.

Here’s part one of the talk: