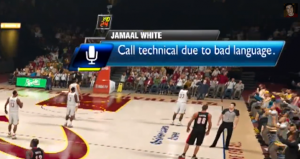 Better graphics aren’t the only way sports titles on the Xbox One are bringing video games and reality closer together.

In a video that’s both amazing and a little creepy, one gamer playing NBA 2K14 shows how he was given a technical foul after the Kinect heard him curse. In an actual NBA game, referees can hand out technicals if players swear excessively, and it looks like the same happens in NBA 2K14.

See for yourself below (Warning: due to foul language, the video is NSFW):

“Oh my God, that’s ridiculous — I can’t curse in my own house,” the gamer says after receiving a technical foul. “I spent $530 for an Xbox One and you’re going to penalize me?”

A few weeks ago, Microsoft began temporarily banning people from using the Upload Studio, which allows users to upload gameplay footage with commentary to their SkyDrive account, and share that footage with the world. According to Microsoft, it was because their language was foul.

But this is the first footage we’ve seen of someone being penalized during an actual game for swearing. A Reddit user noted a similar problem, but with FIFA 14 instead. The gamer received this notice while playing:

Based on some of the comments in the Reddit thread, gamers were noticing the same thing for games on the Playstation 4. It appears that the cursing-recognition is a feature you can turn off while playing in case you want to swear without penalty.

NBA 2K14 on PS4 assessed me a technical foul for using bad language, thanks to the PS camera! Dont remember saying anything bad though…

I know this would be a problem for me, as I don’t seem to finish an entire sports video game without cursing at least once.