Valve co-founder Gabe Newell just gave a 30-minute keynote at the DICE 2013 Summit in Las Vegas. He didn’t make any huge product or game announcements — sorry, Half-Life 3 fans — and rather focused on how Valve is re-thinking what games are and how you sell them. 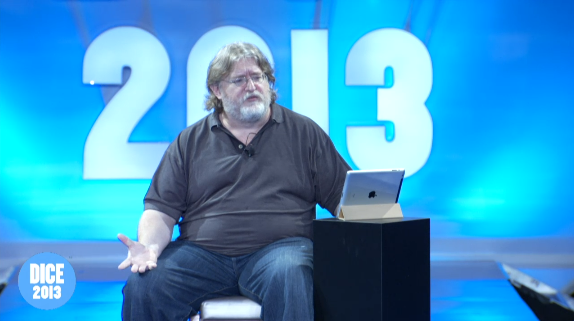 You can watch the speech in full above (skip to 26-minute mark). Here are some of the main points he brought up:

Yesterday, Newell was on stage and confirmed that he has plans to work on a ‘Half-Life’ and ‘Portal’ movie with director J.J. Abrams.

Newell has made headlines in the past few months with his theory of the gaming PC moving into the living room. Newell has discussed “stronger-than-expected” reactions to Steam’s TV-friendly “Big Picture” mode and said he expects PC companies to soon start selling computers designed to hook up to your TV and run Steam immediately.

Newell also said recently that Valve will build its own gaming computer, but added that its hardware package “will be a very controlled environment.”