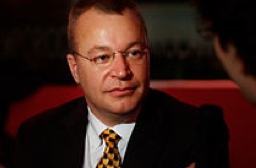 Stephen Elop, the former Nokia CEO who is returning to Microsoft as part of the Redmond company’s $7.2 billion acquisition of Nokia’s Devices & Services business, filed for divorce from his wife of 26 years in early August, according to records on file at King County Superior Court in Seattle.

Normally that might not qualify as news, but the proceedings are fueling a controversy in Finland over a $25 million bonus being paid to the former Nokia CEO as a result of the Microsoft acquisition. People in the country, already upset about the Microsoft acquisition, are asking why Elop deserves such a bonus for a deal that they consider a betrayal of their loyalty to the homegrown smartphone maker.

Microsoft is set to provide 70 percent of the payout, with Nokia covering the rest, according to The New York Times.

Elop is a former top Microsoft executive who maintained a home in the Seattle region after taking the Nokia job. He has been widely considered a front-runner to replace Steve Ballmer as Microsoft CEO, and that speculation only grew following the news that he would return to the company.

King County Superior Court records show that Stephen Elop petitioned for divorce on Aug. 1, saying that the marriage was “irretrievably broken.” He and his wife had been separated since October 2012, according to court papers. The divorce proceedings are still under way.

We’ve contacted the lawyer for Elop’s estranged wife to see if she wants to comment on the reports out of Finland, and Elop’s reported reasoning for declining to take a smaller bonus. A Nokia spokeswoman declined to comment on the situation.