Editor’s note: Othmane Rahmouni, a Senior Product Manager with Microsoft Advertising, traveled to Baghdad for the first time in his life to advise and mentor more than 120 startuppers at the first-ever Startup Weekend Baghdad. Read on to hear about his experience.

This journey from Seattle to Baghdad started in early June when I was invited to take part in the first-ever Startup Weekend event organized in Baghdad. This was my chance to step outside my comfort zone and travel to the other side of the world to help coach young tech entrepreneurs in Baghdad.

As I embarked in this journey, I was unsure what to expect. How much can the entrepreneurship spirit exist in a country that has known war for the last 10 years, a place that consistently gets coverage in world news highlighting new deaths resulting from a bomb or a suicide attack?

As soon as I made it to Baghdad, I could sense the extra security measures in place, both at the airport and in the streets. On the drive from the airport, we must have made it through a dozen checkpoints during a five-mile ride and at each checkpoint, there were army and police officers with AK-47s on their shoulders and special explosive detection equipment. This prompted me to think how one has to always include extra travel time when driving around Baghdad as one is likely to get stopped at one or more of these checkpoints for an ID check and a car search.

The Startup Weekend event was taking place on the top floor of the Al Mansour hotel. Each day, as the elevator doors opened on the 11th floor, I quickly forgot where I was, as my focus turned to the energy in the room sparked by the enthusiasm and the passion of over 120 young entrepreneurs, mostly in their twenties, who came together for the weekend. The hassles they had to go through each morning to make it to the event did not matter, nor did the struggles they might have lived through over the last decade.

The only thing that mattered once they were in that room was how to make their business idea a reality.

As the event started, more than 40 attendees pitched a diverse set of ideas and after a round of voting, 11 teams were formed.

Saad Almoumen’s team decided to work on Baghdad Life, an online multimedia portal and mobile application that can showcase and celebrate the cultural heritage of Baghdad and inform the local community of all the cultural events and festivals taking place in the Iraqi capital. Atheer Ali’s team decided to leverage the team’s software and hardware skill-set to build an app that allows its users to control their home appliances remotely through a smartphone application. Ahmed Jamal’s team decided to build an online portal and application that would partner with local restaurants and enable their customers to place orders online for home delivery.

Just like at Startup Weekend’s I have attended in the Seattle area, teams had their ups and downs as they had to overcome different challenges over the course of the weekend. They had to learn to collaborate with teammates they just met, they had to find ways to overcome their differences in opinions and they had to deal with the time pressures of the event. Similarly to what one might expect at an event taking place in Seattle, discussions among teams covered a variety of topics, from getting customer validation and defining the minimal viable product to debating what the optimal business model might be.

Throughout the event, I was impressed by many teams. One of those teams was the Mahaw team, which won the best technical execution prize. Their idea was to build a solution that helps consumers pick the best internet service provider for their neighborhood. Baghdad has dozens of Internet service providers with varying levels of internet speeds and reliability. The team built a mobile application which helps users measure the speed of the internet connection in their home. They then associated this data with the GPS location they collected to map out the varying speeds of different ISPs across the city by neighborhood.

Mustafa Ahmed Abduljabber, the lead developer in the team, worked through the night, only getting one hour of sleep in the last 24 hours of the event in order to complete it on time. What was most impressive about this team was that the oldest member was only 17 years old.

There were also many individuals who stood out in the crowd. One of them was 24-year-old Maryam Ameer, a motivated woman who wants to drive social change in her city by leveraging animated cartoon videos to convey messages around social issues facing Iraqi society. During the event, she struggled to find a partner with skills in digital animation, but that did not discourage her. In fact, it was quite the opposite: she worked avidly during the event to build her first animation video.

Maryam broke through all the stereotypes one might have of a woman living in the Middle East. She led her team throughout the weekend and stood up on stage with confidence to present her vision and to share what her team had accomplished.

Maryam, an Iraqi college graduate with a degree in IT who has been seeking employment for the last 18 months, did not only win the crowd but also the judges’ hearts. When announced that she was the winner of the first Startup Weekend Baghdad, she jumped in the air and her face was full of joy.

As we spoke after the event, Maryam said that she feels as if she could “accomplish anything in the world.” Her dream is to follow the footsteps of Steve Jobs, and create the Iraqi version of Pixar. For me, moments like this made this trip all worth it. 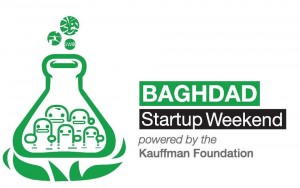 As I worked with different teams during the weekend, I came to appreciate the dedication and the passion of these young Iraqis, full of potential with a desire to learn and to grow. In a city with limited opportunities in the private sector, where most people are seeking government jobs because of the stability they provide, these individuals have other dreams.

They are seeking to pursue a riskier entrepreneurial journey to make their vision of a business a reality. Beyond the challenges any entrepreneur faces in building a startup, these young Iraqis face additional hurdles, such as unreliable electricity, unpredictable Internet connections or insecurity in the streets.

Despite all that, they demonstrated their resilience and their ability to adapt to the environment and demonstrated their commitment to pursuing their dream. They commanded my respect. The tech startup community in Baghdad is still nascent, but after having met its members, I am optimistic that they will help shape a new image of Baghdad in the years to come.

I came to Baghdad unsure of what to expect, but I left with a new perspective. When I think of Baghdad now, I think of the welcoming faces and the smiles of dozens of new friends I made during this trip. I am glad I took part in this journey and I am thankful to everyone who made this event possible, including the half-dozen volunteers who worked tirelessly over the last month, as well as to all the sponsors and organizations who provided their support to make this event a reality, including USAID and Mercy Corps.

As you read this, I invite you to step outside your comfort zone and seek opportunities to give back to the community by sharing your expertise with others in third world countries. I am confident you will come back a changed individual. I know I did.

Othmane Rahmouni is a tech entrepreneur, startup advisor and business strategist based in Seattle. He tweets at @Othmaner and blogs at lovop.com. For more information on Startup Weekend Baghdad, check out their Facebook page.