Struggling to figure out what books to take to the lake house this summer?

Well, you might want to consider BookVibe. The service, a product of San Francisco startup Parakweet, mines your Twitter feed to discover the most appropriate books that your friends are recommending or chatting about.

Here’s a look at my BookVibe, which couldn’t have picked a better title for my personal situation. It recommends Brad Feld’s — Startup Life: Surviving and Thriving in a Relationship with an Entrepreneur. 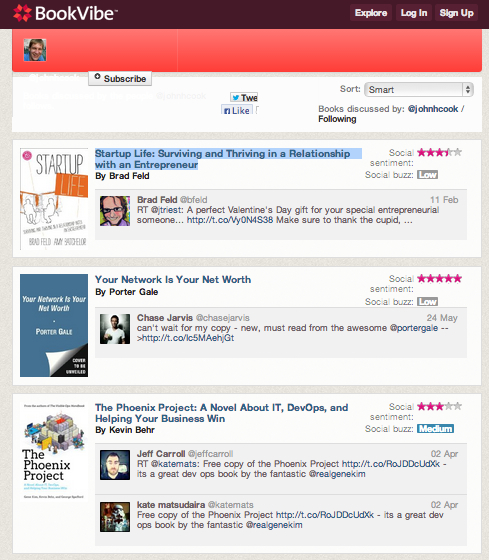 Classic. Couldn’t have hit the mark any better. (In fact, I’ve got Feld’s book on my nightstand, but since becoming an entrepreneur I’ve sadly not been able to read a book).

BookVibe is the creation of Ramesh Haridas, who sold his company, PrivacyBank.com, to InfoSpace in 2000. Haridas also is an investor in the Seattle venture fund Founder’s Co-op and he worked as an intern at Microsoft many moons ago. His previous company, Chintano, also had a development office in Seattle’s Fremont neighborhood.

Those connections to the Northwest are leading the entrepreneur to open a new engineering office in Seattle this fall, fueled in part by a $2 million funding round that Haridas just closed for Parakweet.

Of course, Parakweet will be competing with another major player in the Seattle area. Amazon.com has moved aggressively into social networks for book lovers, acquiring Shelfari and, most recently, Goodreads.

But Haridas said that BookVibe is unique, in part because it taps into existing social networks, instead of forcing the user to create a new one.

“You can tap into millions of ‘organic updates’ or ‘micro-reviews’ about books that your friends on Twitter … are posting to get useful recommendations right away,” says Haridas, who tells GeekWire that Facebook integration is coming soon.

According to Haridas, BookVibes is designed to fix the “cold start problem” by getting readers personal recommendations immediately.

BookVibe analyzes over 400 million Tweets per day, and Haridas claims they can accurately capture 100,000 discussions about books. That compares to the much more established Goodreads in which users “shelve” 150,000 books each day. With the new algorithm at BookVibe, Haridas said they plan to analyze 200,00 books per day soon.

Here’s more of a description of how BookVibe works from the company:

It also detects and distinguishes the person’s sentiment about the book—not the overall tweet. For example, if a tweet reads: “I’m reading War and Peace since the weather is lousy,” BookVibe understands that lousy refers to the weather, not the book. Some of the behaviors BookVibe identifies include “intent to read”, “read” and “recommend.”

In fact, Parakweet believes it can move beyond just analyzing books, expanding with an enterprise software product.

“Companies are able to get accurate and actionable analytics which they cannot get from more “generalist” social media monitoring tools such as Radian 6,” said Haridas. “The business model is to charge media companies, publishers and retailers for analytics offerings. The technology allows companies to tap into the social signals from consumers across social media and use it to uncover actionable insights based on behavior and intent.”