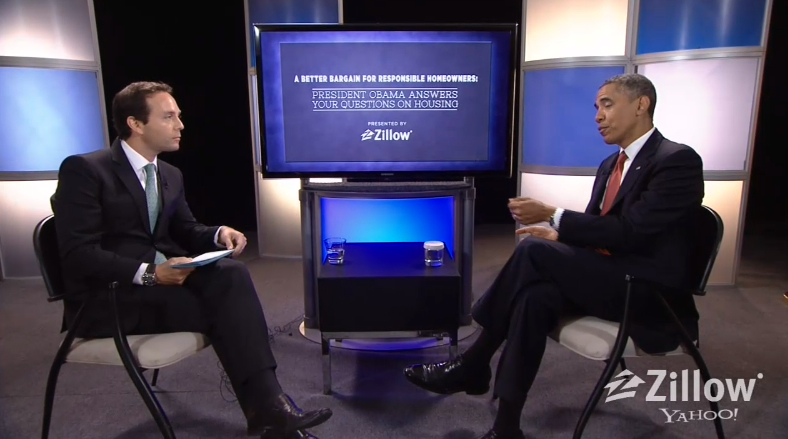 Earlier today, we told you about President Barack Obama’s chat with Zillow CEO Spencer Rascoff, a discussion which was anchored by video questions from average Americans about the U.S. housing market.

It was a light-hearted 25-minute discussion, used in part to elevate the president’s agenda on housing. It certainly was not a deep dive into the policy issues shaking the industry, though some substantive points were still made.

Well, as it turns out, the National Association of Realtors, the largest real estate lobbying group in the country, wasn’t too thrilled about President Obama’s appearance alongside Zillow CEO Spencer Rascoff.

In a memo to members, the NAR said the chat was not a “serious public policy discussion” and that Zillow — which it repeatedly referred to as an “entertainment website” — was chosen to host simply because of a large audience that could “help the White House attract eyeballs to their live streaming event.”

“NAR has expressed serious concerns about Zillow involvement directly to the White House, and is using the opportunity to explore future events with realtor.com,” the memo said.

Now, I am not an insider when it comes to the world of beltway politics, and I certainly don’t have any idea why this would cause such a dust up in real estate circles. Or, for that matter, why the NAR, which put out its own statement earlier today on the president’s housing policies, would even care who hosted the discussion.

But here’s the way I thought about this message when I got my hands on it today.

Imagine if the National Venture Capital Association, a lobbying group which represents the interests of venture capital firms, sending a message like to its members because an entrepreneur like Reid Hoffman of LinkedIn or Mark Zuckeberg of Facebook got a chance to interview the president. Would that ever happen? Would the NVCA, or any other trade group, protest the interview? Or call it light on substance?

Here’s what Zillow had to say about the NAR’s remarks:

Zillow exists to help people become smarter about what’s often the largest purchase of their lifetime – their home. This was an unprecedented opportunity for our users to ask their housing questions to the president of the United States.

The whole thing just seems a bit bizarre to me. Is this a bad case of sour grapes?

On Wednesday, August 7 at 10 a.m. PT, the White House will host an online forum, “A Better Bargain for Responsible Homeowners: President Obama Answers Your Questions on Housing.”

It will be live-streamed on www.whitehouse.gov/live. Zillow CEO Spencer Rascoff is moderating the event.

Here are some questions you might get from members and responses for you to use with Realtors®.

Why isn’t NAR involved in this event?

• The White House wants to attract eyeballs to their live streaming site; this is not a serious public policy discussion.

• As the most influential housing lobby in Washington, NAR engages the White House regularly on issues that matter to Realtors® and the clients and customers we serve, including:

• Our defense of issues that directly impact Realtor® business and the ability of Americans to own and invest in real estate sometimes contrasts NAR’s positions with those of the administration.

• Because of NAR’s leadership in the advocacy arena, our sources tell us that the White House did not want to get caught in a conflict of interest with us.

• In contrast, Zillow has no such conflicts, since they are a housing entertainment website, not an influential real estate advocacy organization.

• NAR has confirmed that this event did not come from the policy side of the White House; it was organized by the White House Communications Department as a public relations opportunity to promote the administration’s positions on housing.

Why is the White House working with Zillow?

• As a popular housing entertainment website, Zillow has a large audience of people who like to look at homes and can help the White House attract eyeballs to their live streaming event.

• The White House wants to amplify a speech that President Obama is giving on Tuesday and keep the message going.

• Zillow does not engage in the public policy arena. Zillow’s website is about using housing as fodder for entertainment, which is what this event aims to do.

• Zillow’s goal is to attract eyeballs to their site; not influence public policy.

• NAR has expressed serious concerns about Zillow involvement directly to the White House, and is using the opportunity to explore future events with realtor.com.

• The White House has explained that they were just looking for a “new, fresh venue.”

• We are making it clear to them that realtor.com is the logical partner for these types of events, both because of the site’s reach with consumers and its link to Realtors®’ industry insights.