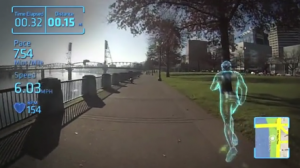 It’s often nice to have an exercise buddy join you on a jog for added motivation. For the times you’re running alone, though, one Portland company is developing a Google Glass app that gives you a virtual running partner to run with.

OnTheGo Platforms, a new startup building software for smart glasses, is featuring Ghost Runner for its first showcase application. With the app, users can save previously timed runs and then race against those times in the future. When you fall behind the pace of the previous run, a virtual buddy will show up alongside you running at that pace. The app, which also lets you race against times of other people, shows other information like heart rate, speed, pace and location.

OnTheGo founders Ryan Fink, Gary Peck and Tyler Phillipi met through the Portland startup community and will soon debut their first software called TouchVision, which turns the cameras on smart glasses into a sensor that detects hand gestures.

The company, which won the Startup PDX Challenge earlier this year, is funded by local angel investors, family and friends, the Portland Seed Fund and the Portland Development Commission. OnTheGo plans on licensing its TouchVision software to manufacturers of smart glasses and release an SDK around touch vision.

“We will be enabling technology for smart glasses, helping to improve the human computer interface and ushering in the post-smartphone era,” Phillipi said.