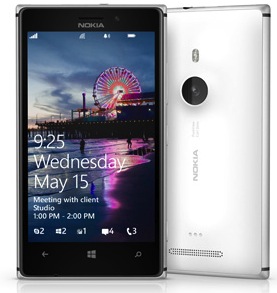 As part of many big moves being made today, T-Mobile announced details for the Nokia Lumia 925, its first 4G LTE Windows Phone.

Available only on T-Mobile’s network, the Lumia 925 will be available July 17 for $49.99 down with 24 monthly device payments as part of T-Mobile’s “Un-carrier” plan.

Nokia unveiled the Lumia 925 at a May event in London, and it got a mostly positive response from the media who were there to try it out in person. The device hits shelves in Europe last month.

At 8.5 mm thick, the Lumia 925 is even thinner than the recently unveiled Lumia 928 (a Verizon phone). The 925 features an aluminum frame that wraps around a polycarbonate body.

Other new features of the device include upgraded camera lens and a new “Smart Camera” mode that lets users take ten shots at once and then edit them with special tools and effects.

Microsoft and Nokia are trying to make Windows Phone a clear No. 3 vs. Android and iPhone. A recent study showed Windows Phone at 4.6 percent of the U.S. smartphone market, which is down one percent from last month but up 0.9 percent from the same period last year.

T-Mobile today also announced a new program called JUMP! (Just Upgrade My Phone) that allows customers to upgrade their phones twice a year with a $10 per month subscription fee.