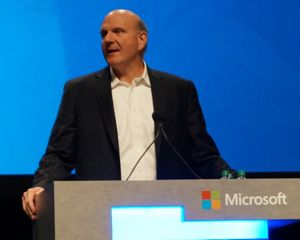 The big news Friday morning hailed from Redmond with Microsoft CEO Steve Ballmer’s decision to retire within the next year.

So, what’s next for the 57-year-old? With a net worth of $15.2 billion and Forbes’ 51st richest man in the world, he certainly has some options.

Ballmer said he plans to stay in Seattle, so let’s take a look at three options for his next step:

1. Bring the NBA back to Seattle

Ballmer was part of an investment group led by San Francisco hedge fund manager Chris Hansen that narrowly missed out on bringing NBA basketball back to Seattle earlier this year. Always a big basketball fan, Ballmer was a regular at Sonics games before the team departed for Oklahoma City in 2008 and also was part of another investment group that tried to keep the team here five years ago.

Some have suggested that in light of Hansen’s much-criticized and regretful attempt to fund an anti-arena effort in Sacramento, it may be wise for Ballmer to take the lead on bringing pro hoops back to the Emerald City. He certainly will have the time and energy to do so now.

Ballmer could make a huge footprint on the Seattle startup scene by setting up a $100 million seed fund for new companies. Something like that might seriously turn Seattle into one of the world’s leading startup hubs.

This might be unlikely, but it’s interesting to think about the impact it could have on a community that Ballmer cares about and has called home for decades.

It’s no secret that Microsoft co-founder Bill Gates, Ballmer’s friend and former colleague, directed much of his time and money to philanthropy after leaving his full-time work at Microsoft. So will Ballmer do the same?

According to Forbes, he’s already made a $10 million donation to Partners For Our Children, a Washington health-services welfare organization that helps children and their families, and gave another $10 million to Harvard, his alma mater. But now that he’ll soon be done with Microsoft, perhaps Ballmer will find a couple new charities and organizations to donate to.

What do you think Steve Ballmer should do next?

Poll: What do you think about Steve Ballmer stepping down?