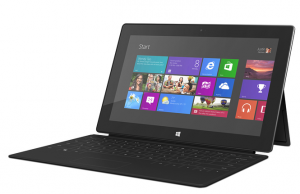 Microsoft just filed its annual Form 10-K with the Securities and Exchange Commission, and deep in the filing is the first public disclosure of the company’s revenue from its Surface tablet lineup: $853 million.

That covers the period from the fall launch of the Surface to the end of Microsoft’s fiscal year on June 30. The company doesn’t disclose the number of units sold, and the range of products from the Surface RT to the Surface Pro makes it difficult to derive an average selling price.

But hypothetically, if the average price were $500 (the original price of the base-level Surface RT), the revenue figure suggests that total units sold were in the range of 1.7 million units as of the end of June. That’s roughly in line with a Bloomberg News report in March, saying that the company had sold 1.5 million units as of that point, well below its original aspirations.

To put the Surface revenue in perspective, the $853 million amounts to roughly 4.4 percent of the total Windows Division revenue of $19.2 billion for the fiscal year. It’s also less than the $900 million charge that Microsoft took against earnings two weeks ago to reflect a $150 price drop in the Surface RT, attempting to clear inventory due to slow sales.

For more context, Microsoft also notes in the filing that Windows sales and marketing expenses rose $1 billion in the fiscal year, an increase of 34 percent, “reflecting an $898 million increase in advertising costs associated primarily with Windows 8 and Surface.”

In other words, Microsoft spent more to advertise Windows 8 and Surface than it made in Surface revenue.