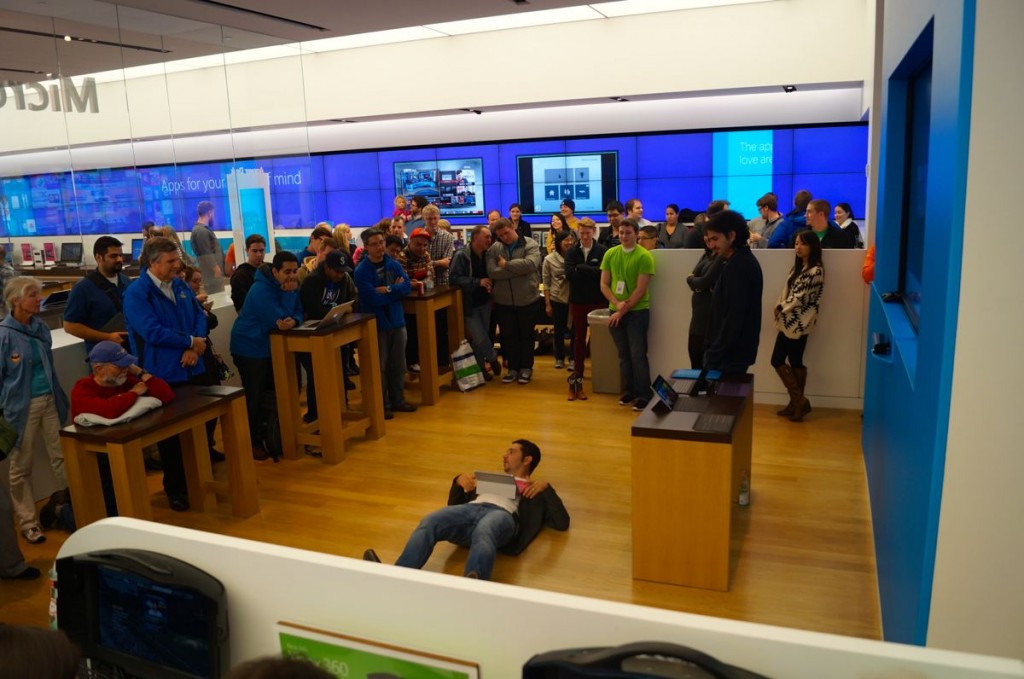 Panos Panay was literally on the floor when I walked into Microsoft’s Seattle store last night.

The vice president responsible for the company’s Surface tablets was on his back, with a crowd of people around him, simulating a reclined position with a Surface 2 on his chest to make a point about the improved angles of the device’s new dual-position kickstand.

These are the lengths to which Panay and his Microsoft team are going in an attempt to win people over to their tablets. For more than an hour last night, Panay and Windows hardware scientist Stevie Bathiche held court at the Microsoft Store in Seattle’s University Village, offering a preview of the Surface 2 and Surface Pro 2 that were unveiled by the company last week.

The talk focused primarily on the previously announced details of the tablets, but toward the end Panay was asked if Microsoft is planning a smaller Surface tablet. Microsoft has been widely reported to be working on a “Surface Mini” but the company hasn’t acknowledged the plans publicly. Panay paused before answering to consider his words carefully.

“We have a lot of great things that we are thinking about and working on, and there are multiple aspect ratios and sizes and awesome things to come from Surface,” he said. “That’s the best answer I have for you.”

Apart from a smaller size, different aspect ratios would address one of the biggest challenges of the existing Surface devices — the landscape orientation that makes the tablets unwieldy to use in portrait mode. Microsoft is improving the hardware with the Surface 2 and Surface Pro 2, but that horizontal orientation remains the only choice for now.

Also last night, Panay reiterated that Microsoft will be coming out with an LTE-enabled version of the Surface 2 early next year, something he first mentioned in a Reddit Q&A last week. Panay said he expects the devices to be available initially on AT&T in the U.S. and Vodafone in Europe. However, he was clear that there won’t be a version of the Surface Pro 2 with LTE.

Panay focused most of his remarks last night on the improved performance, apps, features and accessories of the Surface 2, the successor to the Surface RT, which has struggled to compete with Apple’s iPad. Sales of the Surface RT fell short of expectations, forcing the company to take a $900 million charge against its earnings.

Microsoft is betting on the revamped Surface 2 to improve its chances in a highly competitive market, where it also faces competition from Amazon’s new Kindle Fire HDX, Google’s Nexus devices, the Samsung Galaxy Tabs and other Android-based tablets. Panay told the crowd that the second-generation of Microsoft’s ARM-based Surface device represents a significant improvement over the first.

“I use the Surface 2 on a daily basis. It is lightning fast, and it comes with Office,” he said. “Ultimately you have a product here that gives you the full promise of being the most productive thing you can buy.”

Panay also talked about the improvements in the Intel-based Surface Pro 2, saying that the 75 percent increase in battery life translates into seven to 10 hours of total usage, depending on how it’s being used. The current Surface Pro averages around four hours.

The crowd last night included several existing Surface owners. One of them told Panay, “I have a Surface Pro and I love it, and I feel like it’s the best thing ever. I feel like the general populace of America doesn’t agree. How are you trying to fix that?”

“Well, I’m here,” Panay said, talking about his love for the team and the Surface products. “I’m a firm believer that if you make great products, and you love those products, and you believe in what you’re making, people will learn to love them, as well.”