Halo 5 will certainly not be a free-to-play title. But as for future games from Microsoft’s 343 Industries, it’s definitely a possibility.

That’s the word from Bonnie Ross, who oversees Microsoft’s Halo business as the general manager of 343 Industries. Ross, speaking on a future of video games panel at the GeekWire Summit, shared her thoughts on the free-to-play business model in the ever-changing gaming industry.

“I think you have to look at the free-to-play version,” she said when asked about Halo. “You can’t close the door on free-to-play in the gaming industry. You always need to look at where those options are.”

Ross did say that “it’s incredibly hard just to take a game and also make it free to play,” but added that there are some ways it could happen with Halo due to the nature of the game.

“If we were to ever do free-to-play, we would look at what the right type of game [it would be] for Halo,” she said. “We have the luxury that we have a huge universe where we can do different types of games.”

The panel, moderated by industry vet Ed Fries that also included DoubleDown Interactive president Glenn Walcott and Spry Fox CEO David Edery, spent some time discussing how game developers are adapting to the free-to-play business model. Edery said it’s a sore point within the indie community because people are accustomed to making games that are fun and thinking about little else.

“They are frustrated because now that’s not enough,” Edery said of developers. “Not only do they have to make a game that’s fun, but they have to make a game that makes you want to stick around, share with friends and spend money. It’s a huge challenge. The creative types who are really good at making things fun but not good with the business side, are really struggling with this.” 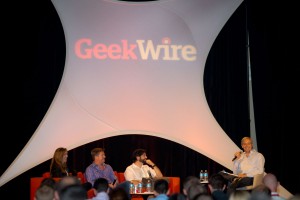 Edery said that the creative and business folks are now forced to work together to figure out how to make something that’s both inherently viral and successful. Though he made several points about why free-to-play is frustrating for developers, Ross did mention how the new business model is “really great for our industry.”

“Free-to-play has lowered the barrier for how people spend their time,” she explained. “We’ll have challenges for how we deal with it long term, but for the industry as a whole and for all the devices out there, I think it’s made people that would not call themselves gamers, gamers. That’s pretty phenomenal for changing the perception of games and I do think it’s groundbreaking that way.”

Edery also brought up an MIT study that analyzed the perception of free products to explain why free-to-play has caught on so much.

“When something is free, all of a sudden you don’t care quite so much what the quality is,” Edery said. “That’s a bit of an extreme statement, but helps you understand why the game industry is going through this massive shift. It’s simply not enough to make a great game and make it high quality.”

The conversation about free-to-play starts at 15:40 in the video below, while Ross talks about Halo and free to play at the 26:10 mark.

For more from the GeekWire Summit, head here.