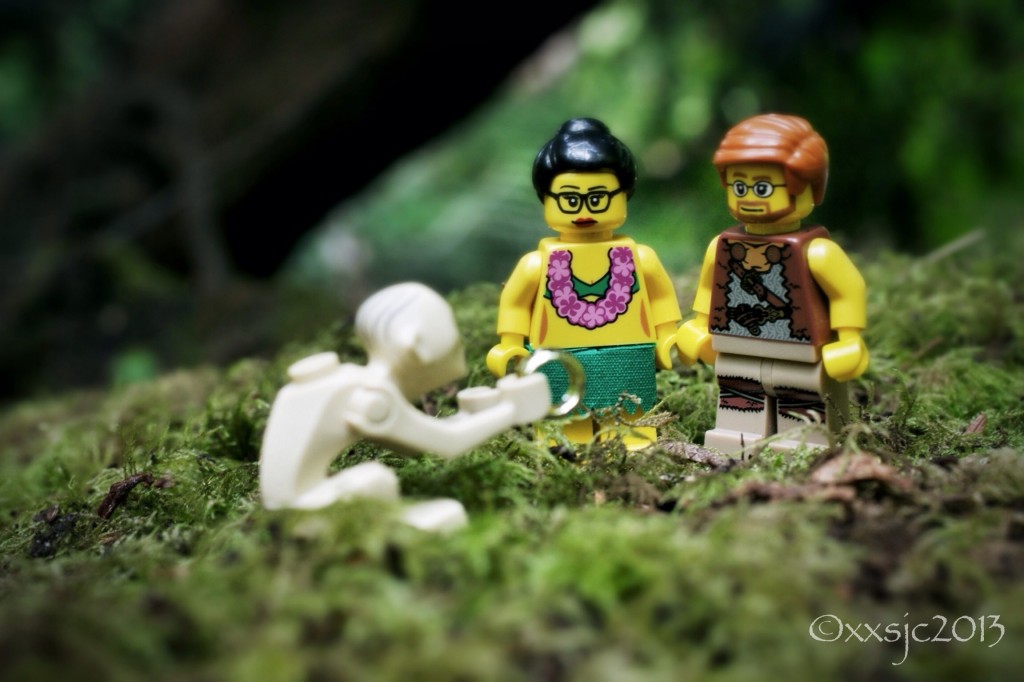 This week my friends Marika Burkhart and Justin Jensen posted some of the best engagement pictures I’ve ever seen.

And they’re not even in them.

Seattle photographer Shelly Corbett took the photos of two tiny Lego Minifigures that Marika and Justin picked as their avatars, in geeky settings ranging from “The Lord of the Rings” to “The Little Prince.”

Marika met Shelly over beers a few years ago. After following her Instagram feed of geeky Lego “minifig” portraits, Marika reached out with the idea.

Marika and Shelly joined me on a chat to tell the rest of the story. 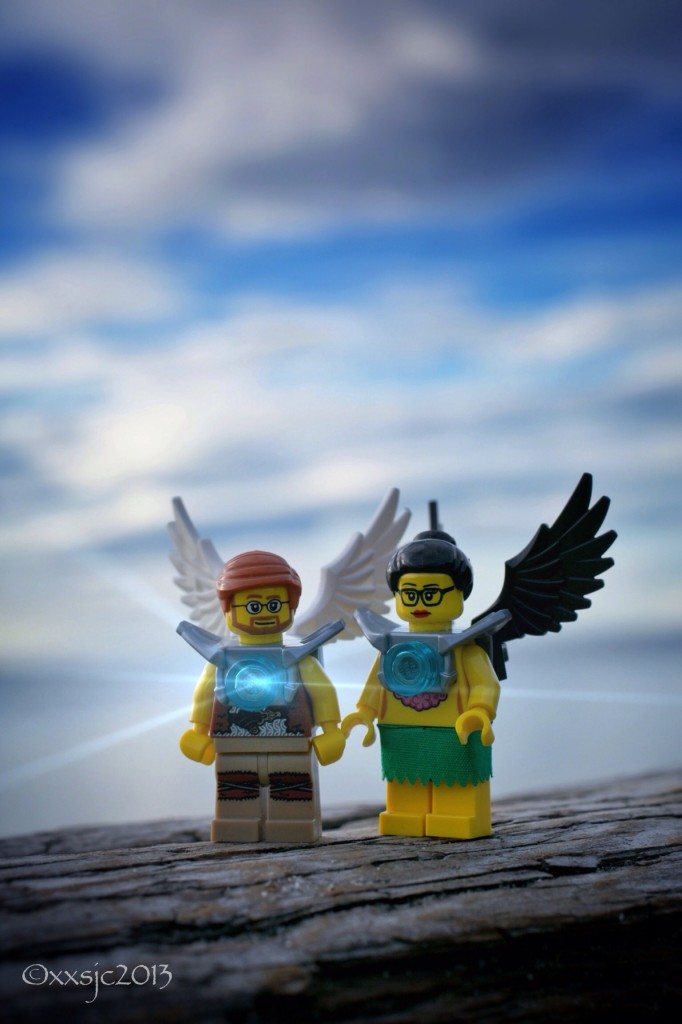 How exactly did this come about?
 
Marika: I was looking for a cool photo of us to use as a thank-you card, post-wedding. The eureka moment was in the car when I was looking at her Instagram feed and said, “Hey! We should ask Shelly if she’d do a portrait.” The fiancé loved the idea.
 
After seeing ALL of the photos she did, we knew we couldn’t just pick one and had to use them for our “engagement photos,” because we were really not into the normal engagement photo thing.

Shelly: I think there are 14 photos total. I am a lousy editor. Does anyone even know how this engagement photo trend got started?
 
Marika: I blame Martha [Stewart]. For everything.

Shelly, what did you think of Marika’s request to do Lego portraits? Had you done that before?
 
Shelly: I thought, YES! I’ve done portraits of friends and a few bands but this was a project I could totally get behind. I think everyone has a secret desire to have a lego “mini me” done of them. 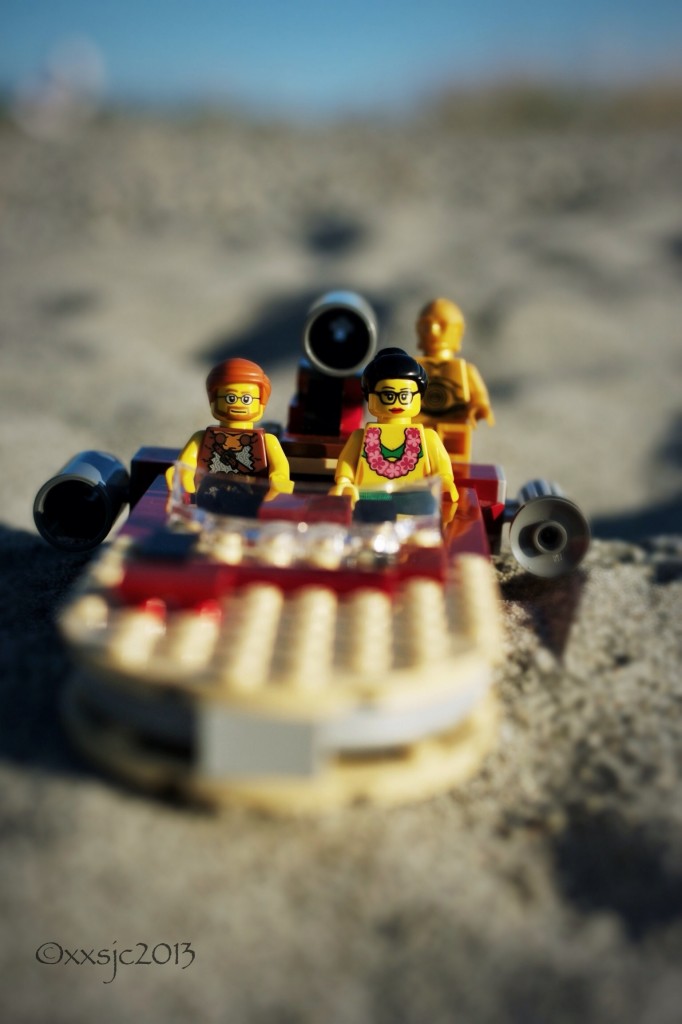 So I’ve got to know – why Lego art? HOW lego art? How did you get started with this?

Shelly: I blame it all on Instagram. I’ve been a photographer for almost 30 years. About two years ago, after much pressure, and boredom with other social media, I tried it. It floundered a bit because I didn’t know what to post. Then I came across the toy photography community. They are chatty, fun, crazy, hilarious and truly supportive group of photographers from all over the world. They take really cool photos of their toys in an effort to bring them to life.

Marika: Being typical Seattle nerds, we were really drawn to Shelly’s work because there are so many thematic Lego scenes she does that we’re into – Lord of the Rings? Medusa? Dinosaurs? Rock bands? They are all so fun.

So how much thought goes into each of your Instagram Lego pics?

Shelly: I think about where I am going and then think about who would look good there. I take along my favorites – like the Chima birds and the classic aliens in suits. I also try to think about their inner lives. What they would be doing. How would they be interacting in our world that is amusing. Then I let spontaneity and the world sort of have its say. 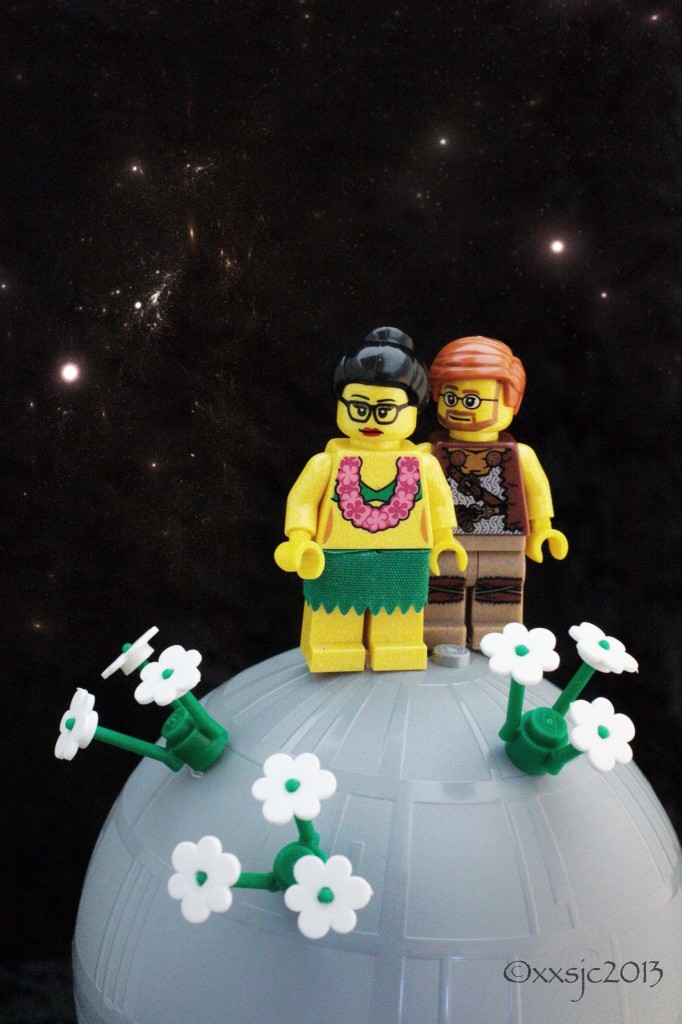 How many Lego minifigs do you have?

Shelly: I have about four containers full, with more on the way. So realistically 300 to 400. I probably buy one to three a week.

Marika: She sent me a photo of us as mermaids yesterday! I was “eeeeeee”-ing all over the place. Justin thought they were awesome.
 
 Wait, so more photos are on the way?

Shelly: We got to talking at my Lego party on Friday [BrickCon was in Seattle this weekend] and came up with a few more ideas. A friend loaned me his Teenage Mutant Ninja Turtles so I can do a few with those now.

Marika: Shelly, you went on a photography trip, right? And she took “us” along to do some other shots. We are TMNT fans, so I was excited about the loaner. She even did one of us in South Park! Justin is a big “South Park” fan.

Shelly: Yes, I travel with my mini-figs and photograph them whoever I go. They are going to Vegas with me later this week and Iceland later this month. 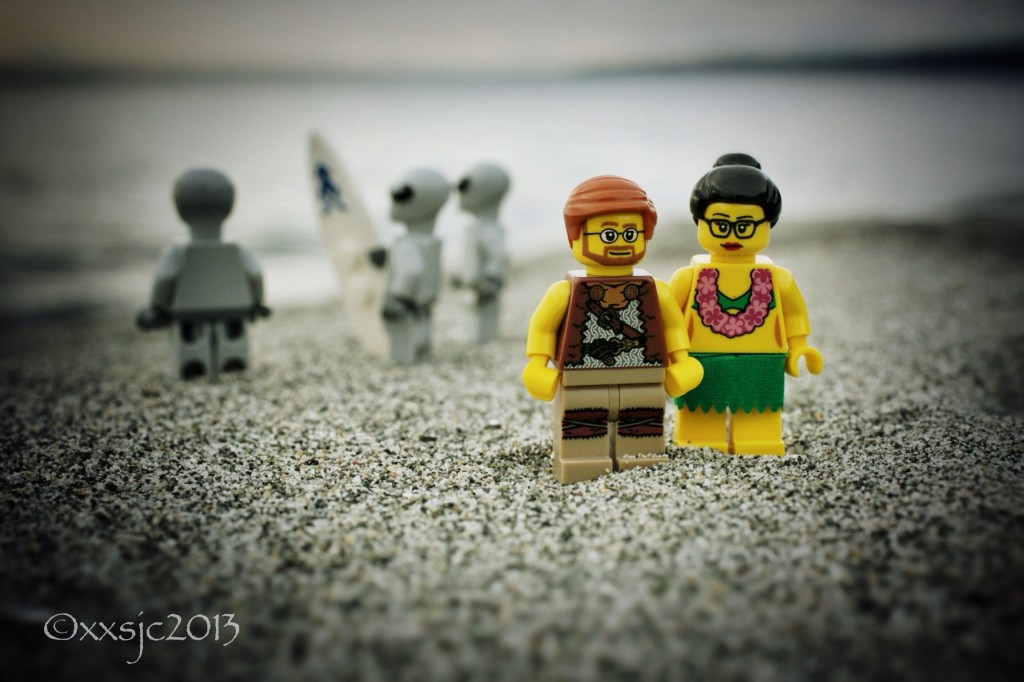 So you guys got together once to plan out the Lego wedding shots. What do have to discuss before someone does your portraits in Legos?

Marika: Well, we needed to pick out what we would look like, so she brought a box of minifigs for us to peruse over. That was FUN.

And you picked Viking guy and Hula girl …

Marika: Yes, Justin is a Jensen and I am Polynesian, so it just worked. I enjoyed the conversation about skin color. We felt that yellow was the best way to go, because it’s sort of neutral. There are brown minifigs, but I liked being Lego color instead of my actual color.

Also, I don’t know my Legos very well… It looks like you can mix and match hair styles? Faces? Clothes? Is that right?

Shelly: Yes! Mix and match. I was at the lego store and bought five new faces from their Build A Minifig bar. Planning ahead for new photo shoots.

Marika, was there any setting you told Shelly you had to get?

Marika: “The Lord of the Rings” and “The Little Prince” were in my top three, along with “Star Wars” or “Star Trek,” “Doctor Who,” etc. As you know, we’re having an outer space-themed wedding, so I wanted to make sure there were some of those elements.

Shelly: My personal favorite is when Gollum is handing them the one ring to rule them all. It was moment of inspiration in the woods and for me it really makes fun of and celebrates what a wedding is a all about in one nice little package.

Marika: I didn’t even know there was a Gollum minifig. I was like, awwww even Gollum gets shmoopy at weddings. 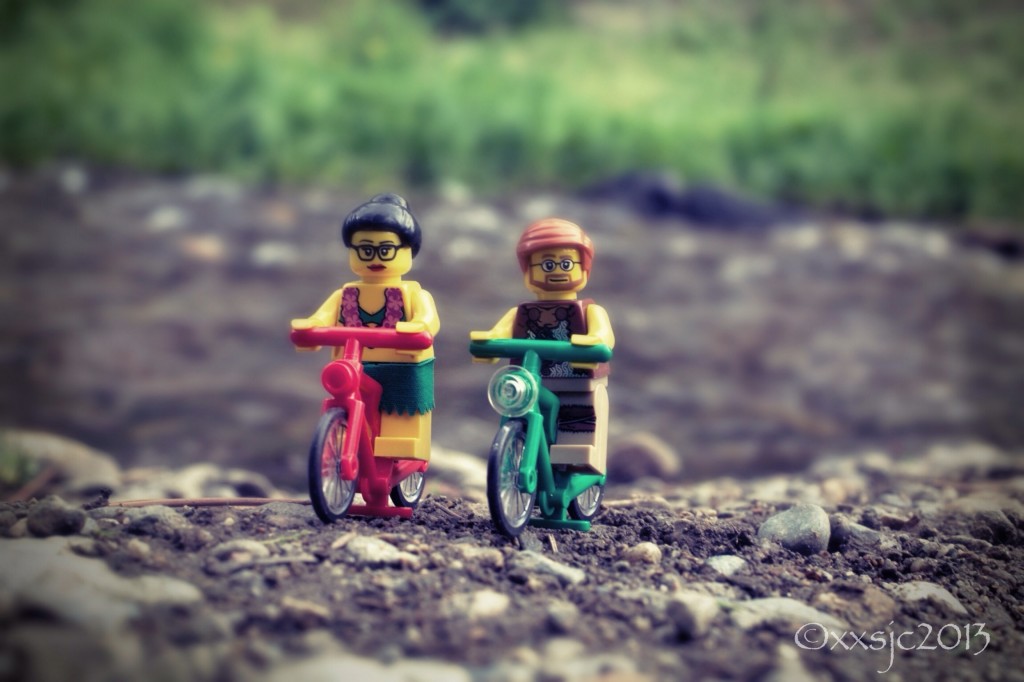 What’s been the reaction so far? INSANE GEEK ENVY?

Marika:  Reactions have been, yes, insane geek envy / appreciation. I’m fine with both. People have gone nutso, and my blog was like WHERE ARE ALL THESE PEOPLE COMING FROM?!?

Shelly: I was thrilled with the response.  It was sort of a test case to see if there is a market for this sort of product.

Do you know of others in the toy community who’ve done wedding portraits like this?

Marika: I know people who’ve had wedding Lego toppers, but never seen the photography angle. If it was going to be a thing, I think Seattle would be the place for it.

Shelly: I haven’t seen it. I run a site on Instagram with some other Lego friends called BrickCentral and my job is to look at all the Lego photos. My sense is it is mostly guys and teens. So they would not be attracted to this aspect of the greater Lego community.

Marika – You said in your post that you and Justin didn’t love the idea of doing traditional engagement photos. What did these pics give you that traditional pics couldn’t?

Shelly: It’s like a big box of dress up clothes!

Marika: I couldn’t figure out how to get photos of us that had this level of fun. While we’re very serious about each other, we’re not very serious about anything else. I wanted something a little silly, a little different – something our friends hadn’t done yet. If we didn’t do this, we wouldn’t have done anything at all. 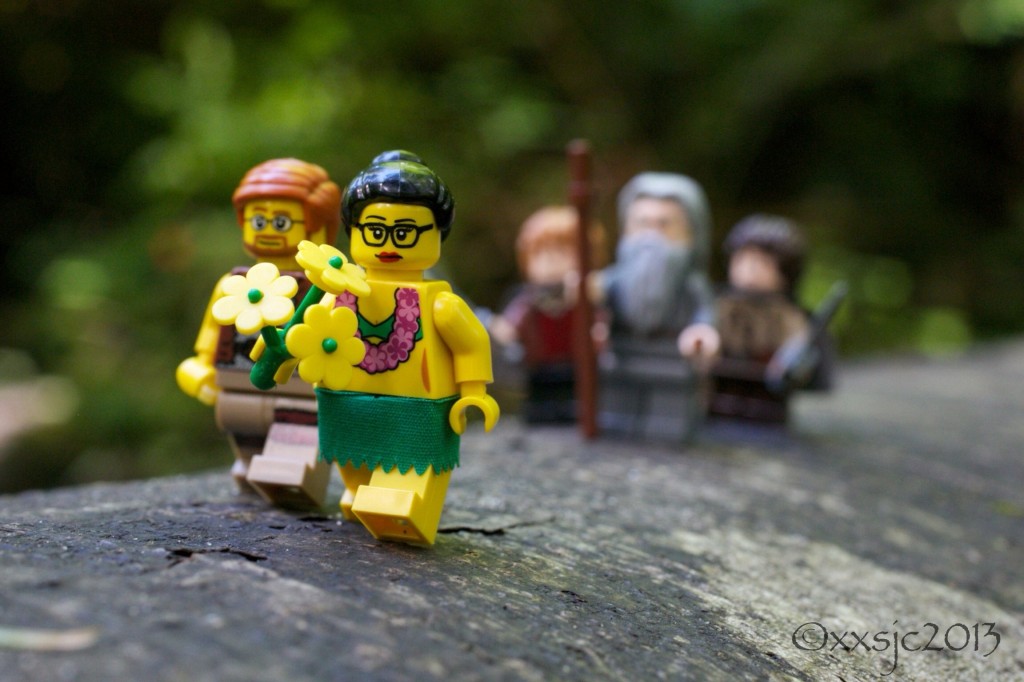 You’re right that engagement pics tend to show you doing things you don’t normally do. Mine were awkward that way. Walking around a Seattle tourist spot holding hands, holding smiles, holding kisses longer than you would otherwise…

Marika: Right – and while most engagement photos are beautiful, they didn’t feel right for us. We’re more into costumes and being crazy. So this was perfect. I like knowing that in 20 years, we’ll still like these. I won’t hate my hairstyle or laugh at my clothing choices etc. They’re pretty timeless.

Shelly: So even though you are 1 1/2 inches tall and yellow, they are more you than a “real” photo would have been.

Marika: And the portrait that’s my profile pic now is the inspiration behind a portrait our wedding photographer is doing of us. Basically Justin as a Viking and me as a Hula Girl.

Marika: We thought it would be fun if life imitated art this time.