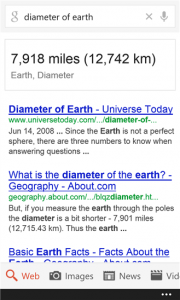 While Google and Microsoft really haven’t seen eye-to-eye on the Windows Phone YouTube app, that hasn’t stopped the search engine giant from continuing to maintain its search app for Windows Phone.

The search engine giant released an update to the Google app for Windows Phone 8, which gets users of Microsoft’s mobile platform closer to the Google experience on other smartpphones. One of the key additions is the ability to sign in to the app itself, which lets Google better suggest searches based on what a user has in his or her search history.

In addition, as with Google’s apps on Apple iOS and Google’s own Android OS, users will also get live feedback from their voice commands as they speak.

None of these changes, first spotted by WMPowerusuer, is anything new for Google’s mobile app, but the fact that the search giant wants to maintain some semblance of parity across iOS, Android and Windows Phone is a good sign for Microsoft’s mobile platform, especially because of the extended feud between the two companies regarding WP8’s YouTube app.

One of WP8’s biggest weaknesses is the lack of depth in its app store, and while Microsoft has been making a number of changes to make it easier to develop for the platform, the company still faces an uphill climb against its rivals.

You can get the updated app from the Windows Phone store.