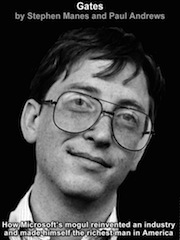 More than a decade ago, as I was getting up to speed on the Microsoft beat, one of my new contacts handed me a biography called Gates, by journalists Stephen Manes and Paul Andrews. More than anything else I read at the time, the epic biography helped me understand Bill Gates and his company, and what made them tick.

Now the book is back as a Kindle version, with a new cover and color photos (for tablets and computers). The Kindle edition also comes with a new Afterword by the authors that puts the age-old Steve Jobs vs. Bill Gates debate in a new historical perspective that will no doubt stir up some debate.

Here’s an excerpt from the update, from the book’s new website.

You name it, Microsoft was there first. Web browser? Pocket-sized computing device? Smartphone? Tablet computer? E-book software? Digital maps? Web-purveyed content? Software that made those cute all-in-one Macintoshen viable as serious machines for actually getting work done? Every one of these things came out of Microsoft long before Apple got on the case. In a world where Steve Jobs is celebrated for his “vision,” the truth is that the vision Steve Jobs implemented looks suspiciously as if it originally belonged to one William Henry Gates.

Alas, Microsoft’s constant prattle about “innovation” never masked its remarkable inability to deliver that innovation in ways actual customers might want. Again and again, Microsoft failed to execute on anything but its core operating systems and office productivity software, and it arguably did a lousy job even there, as the fiasco of Windows Vista attests. The company that had been “the single greatest beneficiary of inept competition of any company in the world” was now becoming precisely the kind of clumsy competitor it had always faced down and beaten.

The authors note that it’s actually not the first digital edition of the book. A company called Allegro New Media released a “Turbo Books” version in 1993 … on two floppy disks.