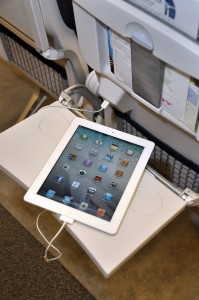 Frequent fliers across the pond in Europe will soon be able to use their electronic devices from gate-to-gate.

Similar to the FAA’s recent decision to ease device restrictions in the U.S., Europe is now set to implement similar rules. The European Aviation Safety Agency (EASA) said today that it will publish guidance by the end of the month that will allow airline passengers in Europe to use their smartphones, tablets and e-books during take-off and landing.

Just like in the U.S., those devices must still remain in “Airplane Mode.” The only exception to the new rule is “bulky” devices like laptops, which still need to be stowed — the same regulations that the FAA put in place for heavier items.

“This is a major step in the process of expanding the freedom to use personal electronic devices on-board aircraft without compromise in safety” Patrick Ky, EASA Executive Director, said in a press release.

EASA also noted that it’s considering allowing passengers to make calls with mobile phones in the air, but this is a long term goal. Using cell phones for calls is still banned on U.S. flights.

U.S. airlines like Delta, United, JetBlue, US Airways and Alaska have already approved the use of electronic devices from gate-to-gate.