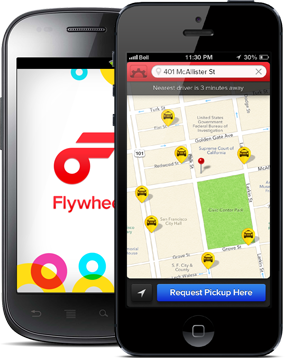 There’s a new way to hail a taxi in Seattle and it doesn’t involve standing in the street and waving your hand.

Flywheel, which allows riders to call for a cab with their smartphone, just launched in Seattle. The app lets you set your location, track a cab until it arrives and pay for the ride once reaching your destination.

Sound familiar? It should. Ride-sharing startups like Lyft, SideCar and UberX all use smartphones to make the process of getting from A to B more convenient and usually cheaper than traditional taxi-hailing methods.

Flywheel is different, though, because it works with fleets that operate legally. Technically, those ride-sharing startups are breaking the law in Seattle because its drivers operate without any licensing or inspection by the city.

Regardless, the Seattle City Council has yet to make a decision as it allows these companies to scoot around town in the meantime. California, on the other hand, figured out a way to legalize the peer-to-peer driving services.

For now, Flywheel is partnering with Eastside for Hire, which offers a similar service to taxis but charges a flat rate calculated by pickup and drop-off zip code. The company has equipped 260 of its fleet with Flywheel technology. So far, Flywheel CEO Steve Humphreys told us that the reception in Seattle has been excellent. 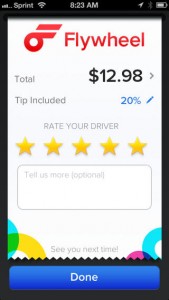 “We track star ratings for our drivers, and over 75 percent of them have five stars in Seattle so far,” he said. “That’s a pretty good indicator.”

Humphreys said that he’s a fan of Eastside’s flat rates, mainly because customers don’t have to pay more when they sit in traffic, for example. He also added that the $29 rate from downtown to the airport is cheaper than any other option in town, ride-sharing companies included.

Flywheel, which is also available in L.A. and San Francisco, was founded in 2009 and has raised nearly $23 million to date. It only partners with licensed, regulated companies that employ professional drivers.

“You know for sure that your driver is insured and professional, so he or she knows the city well enough to take you from A to B,” Humphreys said.

Humphreys doesn’t see companies like Lyft and Sidecar as competition.

“It’s a whole different level of service,” he said. “It’s different desires people are looking for.”

Eastside for Hire has also partnered with Taxi Magic, another app that is essentially identical to Flywheel, allowing you to book and pay for a ride with your phone.

But Taxi Magic takes a different technology approach and integrates with the old legacy dispatch system that taxi companies currently use. Unlike Flywheel, the Taxi Magic app does not let you communicate with drivers and its geolocation technology is slower, Humphreys said.

“You’ll have a different consumer experience,” the Flywheel CEO added.

If you’re interested in using Flywheel, enter the promo code “SeattleRW” to receive $20 in free credits.