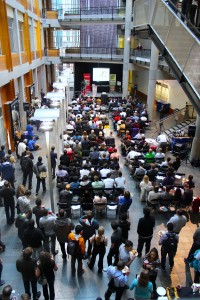 The entrepreneurial talent coming out of the University of Washington was on full display Tuesday evening at the Paul G. Allen Center for Computer Science and Engineering.

For the fourth installment of the Seattle Tech Meetup, five local startups with UW ties gave five-minute pitches to a crowd of several hundred on the UW campus.

But perhaps the most powerful presentation came at the end from Ed Lazowska, the Bill & Melinda Gates Chair in Computer Science & Engineering at the UW. Lazowska stood at the podium as the final speaker and implored the crowd to start supporting education in Washington. You can read all his comments here.

Here’s a quick rundown of the five startups with UW founders and/or CEOs that pitched at the Meetup, a new tech-focused event started by Brett Greene of Fresh Consulting and Red Russak of Apptentive.

PatientStream: Led by founder Ben Anderson, PatientStream is a cloud-based electronic patient-tracking system for hospitals. It licensed its technology from the UW and secured a $500,000 investment announced from the W Fund this past January. Anderson quit his day job at UW Medicine/Harborview in October to focus his effort on PatientStream.

Cadence Biomedical: Led by president and co-founder Brian Glaister, Cadence Biomedical makes a medical device called the Kickstart Kinetic Orthosis, a new technology that’s designed to help those with weakened muscles or disabilities walk. The system uses no motors or batteries, instead utilizing a system of pulleys and springs to capture energy during the beginning of a step. Cadence raised $1.1 million in new funding led by HealthTech Capital in April 2012.

LumiSands: This UW spin-out develops revolutionary nano-particle color enhancer technology that makes LED lighting more attractive, affordable and eco-friendly. Founded by Chang-Ching Tu and Ji Hoo, The company is in the proof-of-concept stage and has raised more than $200,000 in grants. They’re now working out of the C4C New Ventures Facility in Fluke Hall, the UW’s startup incubator.

SpiralGenetics: This Seattle startup makes high-performance software for analyzing DNA and closed a Series A financing for $3 million and also announced a new partnership with Omicia this past March. We caught up with CEO and co-founder Adina Mangubat — who has a background in distributed computing and a degree from the UW in Psychology — for an edition of our Startup Spotlight last summer.

Previously on GeekWire: UW’s Ed Lazowska: ‘Washington is the ass end of the donkey in just about every aspect of education’