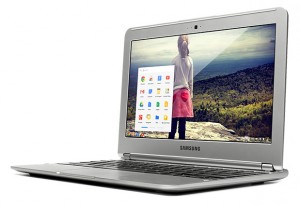 Looks like Microsoft is going to be ordering more “Scroogled” ads.

Amazon revealed this morning that two Chromebooks – the Samsung Chromebook and the Acer Chromebook – were two of the top-selling laptops for holiday shoppers. The news, delivered as part of Amazon’s press release about its massive holiday season, is a milestone for Google’s web-centric computer operating system.

It’s also bad news for Microsoft, which is still trying to push consumers towards Windows 8 PCs as manufacturers look to Google’s platform as a way to diversify their offerings and weather the tablet-fueled storm that is currently pummeling PC market share.

Still, it doesn’t look all bad. One of the Chromebooks’ key advantages over a Windows or Mac laptop is price: Acer’s Chromebook starts at $199, while the Asus Transformer Book, a Windows PC that made Amazon’s Top 3, is more than $400. For people looking to give the gift of a laptop this season, the 200 dollar difference between the laptops may have swayed their decision. It may be that this spike in sales is seasonal, and won’t have that much of an effect on the overall computer market.