Maybe Valve should have kept these two around.

Jeri Ellsworth and Rick Johnson today launched a Kickstarter to raise $400,000 for their projected augmented reality glasses that display interactive 3D images right in front of you. The castAR specs are unlike wearable virtual reality headsets like Oculus Rift, which can only project images into your eye instead of the other way around.

The idea behind the high-tech glasses is fairly novel and while still in the early stage of development, they definitely have a chance to change the way we think about playing video games.

There is certainly a backstory here to note. For nearly one year, Ellsworth and Johnson actually had been working hard on this project while together at Valve. Ellsworth, who led the hardware team at the Bellevue-based game maker, accidentally stumbled upon the idea after trying to solve the issue of headaches and stress caused by near-eye displays.

The first prototype — nicknamed the “head crab” — was clunky and weighed nearly 15 pounds. But it was clear that she was on to something.

“The first thing out of almost everyone’s mouth when they put this ‘head crab’ on was like, ‘Oh wow! Wow,'” Ellsworth recalls in this video. “So I knew that this was really a great direction to go because we could go from this big heavy thing and we could actually start shrinking it down and make super light-weight glasses.”

But Valve “didn’t quite see how it fit with the type of games that they do,” Ellsworth said. Even though several Valve employees came into their offices and spent hours into the nights playing with the glasses — “it was magical,” says Ellsworth — the idea never sunk in with the Valve execs.

Soon later, Ellsworth and Johnson — who had developed software for the specs — were sent packing this past February when Valve fired 25 people in a somewhat surprising and out-of-character move.

“I was devastated,” Ellsworth said. “I had really fallen in love with this project and we had developed so much cool stuff around it. We were heading in a good direction. Devastated — I can’t find a better word for it.”

Hours after learning she was being fired, Ellsworth met with Valve CEO Gabe Newell and asked if he would let her and Johnson continue working on the glasses outside of Valve.

“Gabe turned to the lawyer in the room and he said, ‘Let them have it,'” Ellsworth recalled. “And I was like, ‘Oh, O.K.’ At that point it was still a really sucky thing, but hopes were kind of reinvigorated.”

So that evening, the jobless friends drank an entire bottle of wine, watched Dukes of Hazzard and built a plan to develop the product.

Eight months later, here we are. The duo created a company called Technical Illusions to help commercialize the castAR glasses and today is the culmination of many iterations, two successful Maker Faire shows and an idea born two years ago inside Valve’s offices.

“In early 2013, an ‘opportunity presented itself’ so that Jeri and Rick were able to acquire the technology, forming a new business together to continue the project independently,” reads the Kickstarter page. “Over the course of the next 8 months, they spent an average of 14 hour days, 5-6 days a week, pouring most of their energy, lives, and personal savings into expanding and creating new technologies that have become castAR.”

Below is a description from Technical Illusions that explains how castAR works. In a nutshell, the glasses — which weigh less than 100 grams — have two tiny projectors that display 3D images onto retro-reflective material. Those images bounce back to your eyes, producing a pretty cool interactive scene in front of you.

The lightweight castAR glasses project a 3D image onto a surface, producing a stereoscopic image. The surface is a special material called retro-reflective, which is designed to bounce light almost directly back to the glasses with very little scatter. It creates bright, beautiful, and striking image projections. Dynamically responding to changes in player position and orientation, our head tracking system allows you to move freely around the surface to see this image as closely as you like.

Basically, it’s like this scene from the 1977 film Star Wars: Episode IV – A New Hope:

castAR is actually also a three-in-one device and can turn into a virtual-reality headset like Oculus Drift: 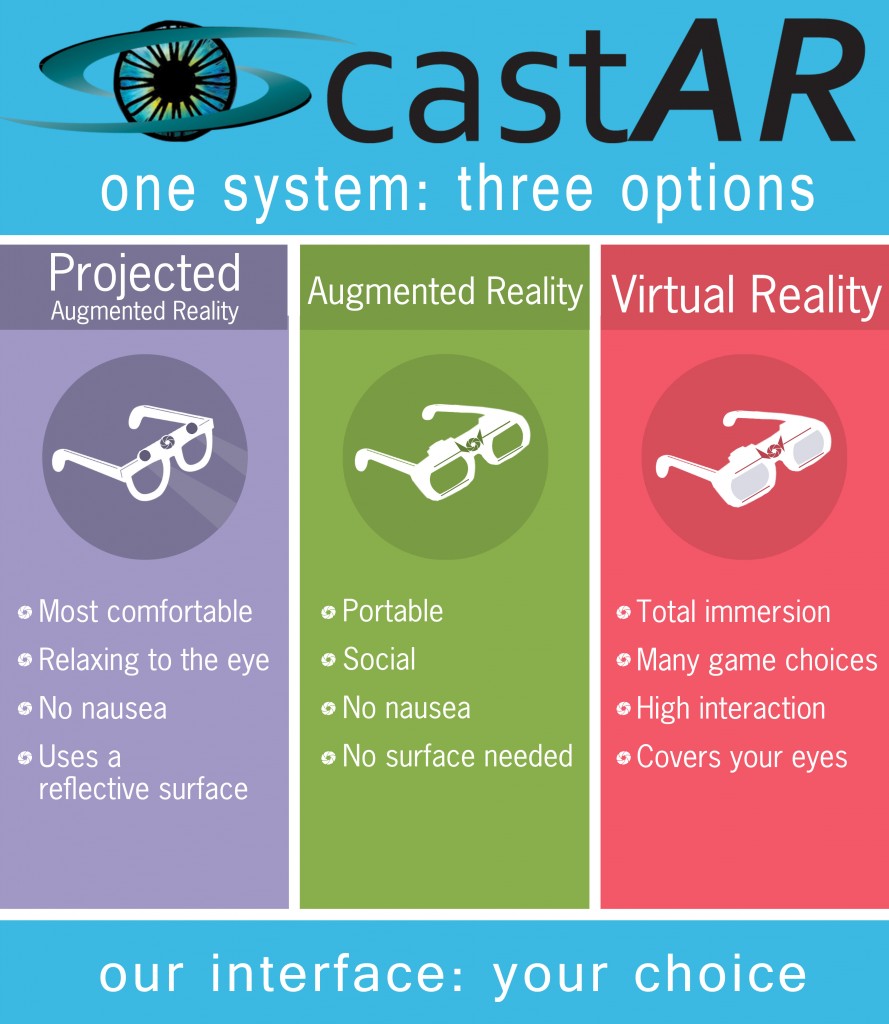 Technical Illusions has also developed an input device called the Magic Wand, which lets you interact with the virtual world in front of you. It has also built an RFID tracking system, which lets you play virtual table-top games with a pre-built map, for example.

It’ll cost you $189 for the starter set, which includes the glasses and the reflective surface. Delivery is expected by September 2014. The Kickstarter page has much more information, and you can watch the video below for more.