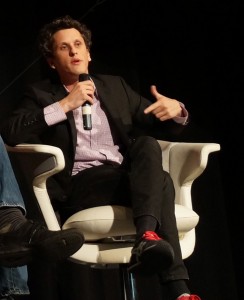 Just for the record, Box CEO Aaron Levie isn’t publicly throwing his hat into the ring as a candidate for Microsoft CEO. GeekWire asked him the question this afternoon, not entirely seriously, and the 28-year-old tech leader gave us an appropriately lighthearted brush-off, saying he hadn’t been approached by the Microsoft board yet.

“I think that’s a little bit too difficult of a challenge at the moment,” he said with a laugh, adding that the 100 percent year-over-year growth being experienced by enterprise cloud storage company Box is keeping him “busy enough.”

Levie was a surprise guest at Microsoft’s Build conference this summer, touting integration between Box and Microsoft’s Windows Azure Active Directory. But Box also competes with Microsoft, as evidenced by Microsoft upping its storage limits for SkyDrive Pro today in an apparent response to Box’s recent increase in its free storage limit.

As a native of nearby Mercer Island, Wash., Levie says he does root for Microsoft — his frequent Twitter barbs notwithstanding. He said he doesn’t believe the Steve Ballmer era at Microsoft was as bad as some would suggest, or as indicated by the company’s share price.

However, he does have strong opinions about where the company has gone astray, and what it needs to do now. Here are a couple of key excerpts from his comments today.

“It’s very easy to talk about how they missed the iPhone and the iPad, Android and Google search and those kinds of things. But it’s more the philosophical issue that they missed, that has really changed the world, which is that technology is much more open, it’s much more fluid, it needs to work with other services that you’re using, and unless you really deeply understand when that change has occurred, you might end up with the wrong product for what the market needs. And I think in some respects that’s what happened at Microsoft. They became less of a dominant platform company. They didn’t make their applications any more open in the process, and that’s not a win-win.”

“I do think that the new leadership coming in has a bunch of decisions to make. One is, do they continue on this devices and services strategy, and how do they make that much more of a compelling proposition, rather than something that sort of just seems like a lesser version of Google and Apple’s strategy today. I think they really need to stand for something powerful. And we obviously hope that in the process they get more open, and they work with the ecosystem more. … I just think the tactics and the Microsoft that we saw in the ’90s and the 2000s is going to have to be changed pretty substantively going into 2015 and 2020.”

For more from Levie, see his talk at GeekWire Startup Day last year.