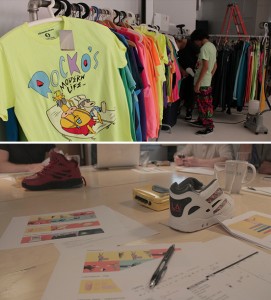 Back in January, Microsoft debuted an epic advertisement for Internet Explorer that featured everything kids in the 90s grew up with — The Oregon Trail, Hungry Hungry Hippos, Super Soakers — with hopes of convincing people to use Internet Explorer again, much like many have before jumping ship to Google Chrome or Mozilla Firefox.

The ad was a huge success, garnering seven million views in five days. It’s now sitting at 28 million views, three months after its debut, and was nominated for a Webby Award for Best Online Commercial. Side note: Webby rolled out a slick new interface for their awards page this year with the help of Microsoft’s Internet Explorer team.

Column Five Media, a creative agency based in Newport Beach, Calif., wrote a behind-the-scenes blog post detailing how exactly they worked with Microsoft put the project together.

The company realized that no one had “truly capitalized on ’90s nostalgia” yet,” and IE seemed like the perfect fit.

Here’s how the agency said the advertisement helped the IE brand:

We certainly wanted to drive viewers to the site to rediscover Internet Explorer. But even if they didn’t, by sharing the video, they were sharing the story—a story inextricably connected to Internet Explorer, a story that might not lead everyone to switch browsers that day, but that would linger and grow in a generation’s mind. That story has been told more than 27 millions times to date, and that’s the impact we wanted more than anything: a reframing of IE’s relationship with Gen Y.