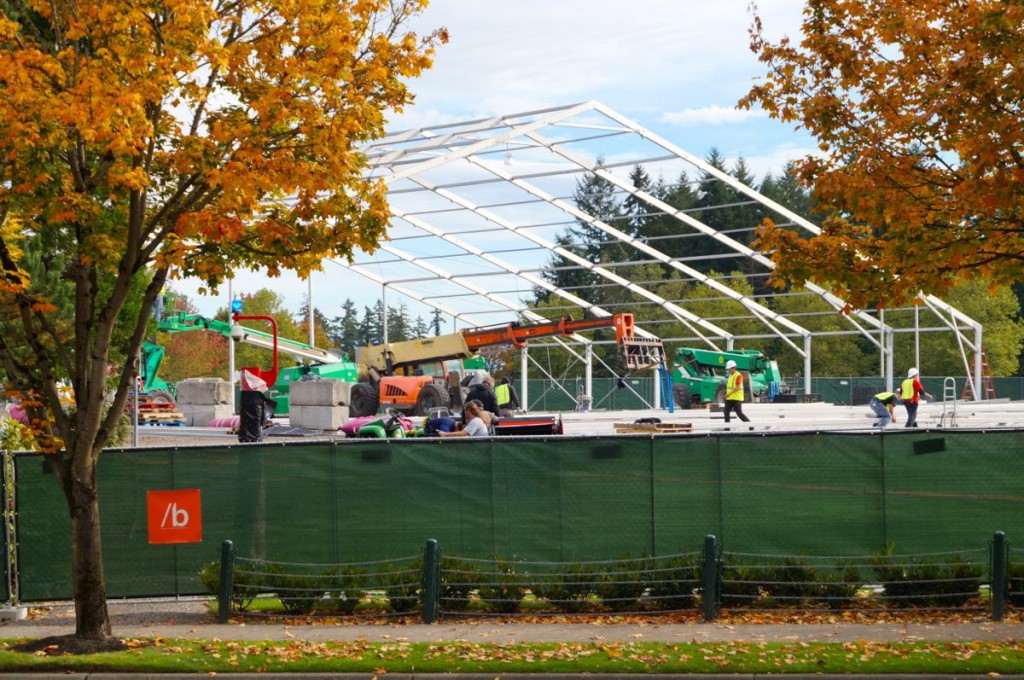 Earlier this week, Microsoft fenced off a large swath of the original ballfields at its Redmond headquarters. Construction crews covered the ground in special flooring and started assembling a structure reaching three stories into the sky, with a footprint roughly the size of 12 NBA courts.

No, this is not Steve Ballmer’s backup plan for a new basketball arena. This is how much Microsoft needs to win the hearts of app developers.

It’s one of the largest tents in North America, seating more than 2,000 people, and it will be at the center of an upcoming Microsoft developer conference called Build, taking place Oct. 30-Nov. 2, the week after the pivotal Windows 8 launch.

Mary Corrales-Diaz, executive producer for Microsoft Events and a 25-year veteran of the industry, said the experience will easily rank among the most memorable projects of her career. She and her team are accustomed to enormous stages and construction projects, but they normally produce events at existing buildings.

“We have to rethink how we do everything,” she said. “It’s been a new puzzle for us. It’s been great.”

From a stage inside the climate-controlled tent, Microsoft executives will attempt to pull off the technology industry’s equivalent of an old-fashioned revival — trying to inspire the crowd to create more and better apps to support one of the biggest waves of products in the company’s history.

To quote one of Ballmer’s famous lines, the company’s fate vs. Apple, Android and other tablet and smartphone rivals will depend largely on “developers, developers, developers” — indie coders, startups and large companies creating apps that make computer users want to use a new generation of Windows devices.

Microsoft normally holds its biggest developer conference at giant convention centers in other cities, often in Southern California. This time around, the company is bringing everyone into its home, hosting the event in facilities including the Microsoft Commons complex, large conference facilities on the second floor of the Microsoft Visitor Center, the Microsoft Conference Center on the east side of the campus … and that enormous tent.

“We’re a Seattle company, and we’re proud of the work we do here, and the campus experience is something that we want to show off to Build attendees,” says Microsoft’s Tim O’Brien, general manager of Developer & Platform Evangelism.

For people who can’t make it to the event, the company will also offer extensive online coverage with video and related content from the event. Jeff Sandquist, Microsoft senior director of developer relations, compares the plan for the company’s Channel 9 developer site to the way NBC treats the Olympics.

Tickets for Build sold out in less than an hour, and Microsoft says 50 percent of attendees have never before been to one of the company’s developer conferences.

The on-campus experience is designed in part to give developers immediate access to the company’s own development teams for Windows, Windows Azure, Windows Phone and other Microsoft platforms.

In its attempt to stock the Windows Store with Windows 8 apps, Microsoft will point out the potential financial opportunities for developers who can come up with a hit app on a platform that, despite recent declines, still ships hundreds of millions of units a year. The company is also offering flexible terms including a revenue split that goes from 70-30 to 80-20, in favor of the developer, after an app reaches $25,000 in sales.

Microsoft will host a hackathon during the Build event to get developers working on apps, but with a different twist — encouraging teams to choose the conference sessions they attend based on what they need to help them complete their apps during the course of the conference.

“It’s going to be a world-class event. It’s going to be unlike anything we’ve done on campus in a very, very, very long time,” said Sandquist. “Really it’s about getting developers here, connecting with Microsoft engineers, and really learning to build apps.”

The giant tent will start to come down on Thursday, Nov. 1, after hosting Build keynotes and parties. Here’s Sandquist showing us the structure under construction …