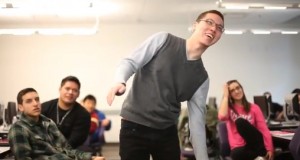 The study of mathematics is largely about abstract theories. But Jeb Pavleas and Jack Chang Keng-Wei — two enterprising students at the University of Washington-Bothell — think they can make math education more accessible.

And they’ve chosen Microsoft’s Kinect as the tool to do it.

The programmers behind Kinetic Math just advanced to the semi-finals of Microsoft’s U.S. Imagine Cup, a competition that challenges students to utilize technology to solve real-world problems.  The finals will be held in April in Seattle.

Here’s a look at their project:

Also competing from the UW-Bothell is Team Credit/No Credit, comprised of Evan Harris, Craig Nishina, and Peter Thongprada Luangrath. The’ve created an educational game which instructs kids and young adults about the spread of infectious diseases, including HIV and Malaria.