One of the most compelling things about SEOMoz co-founder Rand Fishkin is his complete transparency about the entrepreneurial voyage. Not many folks I know, lay it on the line quite like Rand, and because of that his talks are always engaging, funny and insightful.

Fishkin delivered another one of those talks last week at the Startup Conference in downtown Seattle where — among other things — we learned how much debt he and his mom accumulated during the early days of SEOMoz and the amount of stock he gave to employees down to a fraction of a percent (Historically, early employees earned up to 1.5 percent).

Fishkin, who dropped out of college in 2001 to start SEOMoz, started his talk by telling the story of the early days of the company as a Web design and development firm.

“We sucked balls at it,” Fishkin said bluntly to laughs from the crowd.  Despite accumulating mountains of debt and deciding which employee should pull down a paycheck (Matthew Inman, aka The Oatmeal, worked at the company at the time), Fishkin was able to reposition as a provider of SEO-related software and services. This year, he said the company — which has raised just $1.1 million in funding to date — is on pace to hit $18 million in revenue.

How did Fishkin do it?

For one, he said they spent very little cash (just 18 percent) acquiring customers through paid channels. 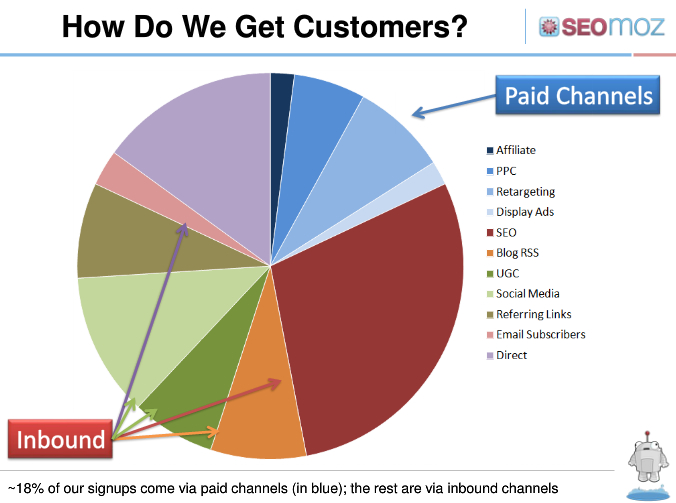 “We don’t pay to get traffic,” said Fishkin. “Nothing. Never, any… What choice did we have? So, the way we went about this was through all of these other channels — through SEO, through blogging and RSS feeds, through community building, through social media marketing.”

Fishkin said that those channels don’t get as much attention as sexy advertising efforts.  And that’s just baffling to him.

“This advertising crap, it is just bothering you from doing what you want, so people can sell you crap that you don’t actually need,” he said. “And I don’t believe in that type of marketing.”

On the other hand, marketing driven by great content or information or search marketing actually works much better than traditional advertising.

“This philosophy of inbound marketing — of earning your visitors’ attention instead of buying it —  I love it. I love it because a) it is free b) it works and c) I feel good about it…. There are very few marketers in the last 100 years who feel great about their profession. Marketing often ranks right around lawyers and car salesmen, they hate the way it influences their lives and permeates their thinking.”

“For God’s sake, if you are going to do anything about marketing, get your ass on Google+,” he said. “Google is handing away traffic and clicks and business, thanks to this new medium.”

At the end of the day, Fishkin said that inbound marketing is not getting quite as much investment as other channels. But those who utilize it in smart ways can win, he said.