Startup companies all over the country are fighting hard to attract and retain top technology talent — a tough chore given the rise of powerhouses such as Facebook and Amazon.com which are lapping up engineers and developers at every turn. (No wonder some startups have resorted to giving away cats in order to find engineers).

PayScale, the Seattle online salary information provider, just compiled the top cities in the U.S. for startup IT jobs. It’s not a big surprise that San Francisco ranked first, but Seattle is right in the mix when it comes to both median annual pay and tech startup worker ratio. 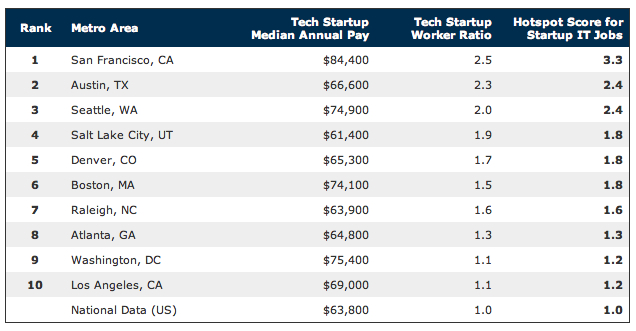 (The map and chart above shows Seattle in third place, even though it has the same score as Austin, Texas). I’ve asked PayScale about that and will update when I hear more.  Update: I am told that it is a rounding issue, and Seattle’s official score is actually 2.35. (Damn, those SXSW showboaters in Austin actually are ahead of us, though I still wouldn’t trade tech communities with them).

Previously on GeekWire: Why it’s so gosh-darned hard to find tech talent: Thoughts from 8 startup veterans