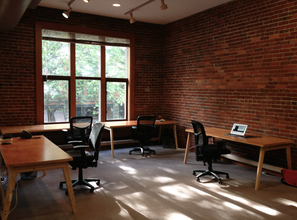 Cloudant is growing, and we recently opened offices in Seattle and the UK (in addition to our headquarters in Boston, near Cloudant’s MIT birthplace). As a YCombinator company, Cloudant is conditioned to run lean, but we also have an exceptionally technical team with an appreciation for good design.

This made finding and furnishing our new office particularly challenging. Here’s the story of how we did it in Seattle, aka “Cloudant West.”

In his seminal 2005 article “How to Start a Startup,” Paul Graham writes: “For a startup location is very important.” We couldn’t agree more, and it’s why we surveyed five different neighborhoods in Seattle: Downtown, Pioneer Square, Capitol Hill, Fremont/Ballard and South Lake Union. Our criteria were loosely based on:

Environment concerns quickly narrowed down the list. Downtown is rather soulless during and after business hours. Fremont/Ballard and Capitol Hill are amazing places to live and hang out, but they don’t have the necessary concentration of other companies. I wanted to love South Lake Union, primarily because it’s close to the lake and Amazon and biotech are absolutely transforming the neighborhood. Everything is shiny, new, and most intersections have their own cop to direct traffic (Amazon makes things happen).

Unfortunately, aside from Techstars it doesn’t have many companies in our space. The kicker was the small selection of food and the surprisingly high costs. That left us with Pioneer Square, which luckily maps well onto space, cost, connectivity and commute.

There are a multitude of lofts with just enough brick, priced well, and close to the all-important fiber. To boot, we have several customers around the corner, Future Advisor (YC10) across the street, easy access from three directions, and are right next to Century Link and Safeco fields.

Next step – find a good space.

Ben Anderson took the lead at scouting locations. I should say that commercial real estate is due for disruption. The fact that agents still control the listings and cost is absurd and creates an inefficient market. That said, we followed advice from several advisors and were introduced to a trusted agent that put plenty of good properties in front of us.

We found it challenging to envision how we would lay out an office, so we called in the experts – my fiancee LJ. I delivered a blueprint to LJ and before I knew it she gave us a Google Sketchup model for layout and a video to send back east for the final sign-off. Here’s the video from the winning space; thanks LJ.

We decided that we could nicely lay this space out for 10 people without feeling crowded. We could get desks (more on that below) that would be easily re-arrangeable, and we could have space for sales and bizdev, meetings, open discussions, and door-closed, heads-down coding.

This was hard. Our office in Boston came furnished. Since this time around we had a blank slate and some time to think, we decided to be creative. Ikea desks are actually OK, I’ve had many in my time.

But, we wanted something just a little different, with superior function, fit/finish, and an imprint of the Cloudant brand: technical, well made, and aesthetically pleasing.

We decided to build instead of buy, and to improve on Amazon’s famous door desk design. (Blueprints, specifications and instructions are available upon request). I’d like to say that I had a big hand in this, but really LJ led the charge (startups are a family affair). For the first prototype she selected a beautiful recycled door that she bought for $20. It required stripping and staining.

Here’s a look at the prototype in our living room in March. This door had recessed panels. We investigated simply covering the door with a sheet of glass but found that it was expensive, prone to finger prints, and sharp on the edges. Instead she filled the recessed portions with plywood. The inserts are held from below by screws and then the entire surface (door + insert) sanded to a uniform height and finish. Using multiple stains gave us a cool two-tone finish and then the entire door was coated with multiple layers of varnish. 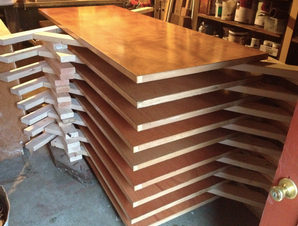 This prototype turned out to be beautiful but labor intensive, so we instead chose to purchase solid core doors from Home Depot (~$40 each) and proceed to sand, stain, and varnish them all. We (meaning LJ) used the lumber purchased for the desk frame and legs to ingeniously stack doors so that we could varnish them in our tiny garage. It’s critical to varnish the doors in a level horizontal position and in a particulate free environment. We recommend two coats of stain minimum and three coats of varnish for a uniform and smooth finish.

The support frame to turn the door into a desk was also a challenge. Several configurations were tried and we settled on running a single 2×4 on edge underneath the door running the length for support. That board is screwed into the underside of the door using small right angle metal tabs and provides a mount point for legs on each end of the door. The legs are cut and assembled from 2×4 pieces as well. 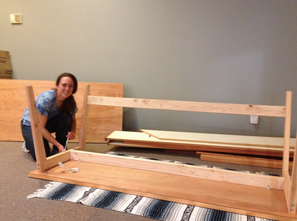 We had quite a bit of fun making these desks. We got help from a longtime friend and advisor of Cloudant Ross Rosen and YCombinator’s own Tony Wright (seen pulling quite a face below left).

Tony, always the designer, augmented LJ’s initial tapered leg design by rounding the corners (trying his best to make the table look like a big beveled “call to action” button). We ended up with a stack of gorgeously rounded legs, but they were a bit tricky to hold together, drill, and screw together without someone holding them in place with inventive yoga moves.

These desks are huge. You can comfortably fit four laptops if you use both sides, but we give one to each employee. It’s highly conducive to teamwork, as it’s easy to pull up a chair and work with somebody to solve a problem, review a design or test an interface.

The rest of the office we furnished primarily from Costco business, and we’ve been particularly happy with the ProGrid chairs (highly adjustable, robust, comfortable) for under a third of their list value.

It took some work, but Cloudant West is a space that speaks to the ideals of YCombinator and Cloudant – build great things that people really like. I love our new colony in Seattle, and I really love my homemade desk.

Mike Miller, a former physics professor at The University of Washington, is co-founder and chief scientist at Cloudant. The three-year-old startup employs five people at its new offices in Seattle’s Pioneer Square neighborhood and more than two dozen globally. This post originally appeared on the Cloudant blog and was republished on GeekWire with Miller’s permission. Follow him on Twitter @mlmilleratmit.